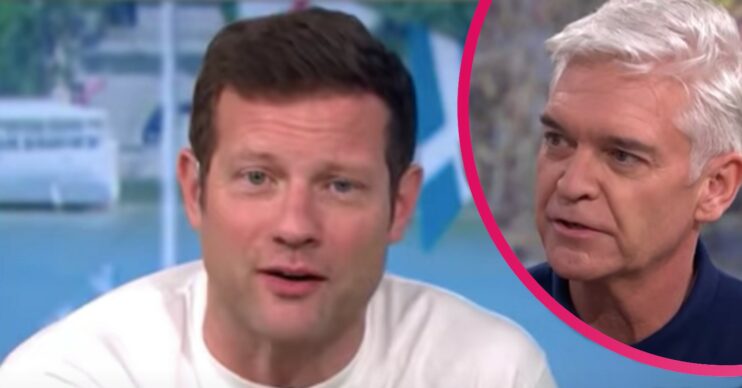 He hosts the show with Alison Hammond on Fridays

Dermot O’Leary is set to replace Phillip Schofield if the ITV This Morning host ever quits the show, it has been claimed.

According to a new report, ITV bosses believe Dermot, 48, has gone down a treat with This Morning viewers.

And they’d love him to take over as the face of the show if Phillip, 59, ever does decide to move on.

According to The Mirror, ITV is thrilled with Dermot as a host and considers him Phil’s “back up”.

When did Dermot O’Leary join This Morning?

The former X Factor host took over Friday slots on This Morning along with Alison Hammond at the beginning of this year.

They replaced Eamonn Holmes and Ruth Langsford, who had been on the show for some 15 years.

At the time of the announcement, Dermot said he hoped he wouldn’t upset anyone by taking on the gig.

Speaking to Ireland AM in November 2020, he said: “It is always tricky when there are colleagues and friends involved.

“You don’t want to tread on anyone’s toes or treat anyone badly.

“So you’re always sort of caught between a rock and a hard place on that sort of stuff.”

How did Eamonn and Ruth react to ITV This Morning ‘axe’?

While Eamonn and Ruth haven’t directly spoken ill of the decision, a source at the time said Eamonn was “furious”.

Speaking to The Mirror, the source claimed: “Eamonn is pretty furious and everyone feels for him and Ruth, they are well liked on the team, but sometimes tough decisions have to be made.”

However, the married presenters do still host This Morning when the other hosts are away.

In fact, they both made dignified tweets when their “axing” was confirmed.

They both tweeted: “It’s a changing of the guard on Fridays from January. We hope you make Alison and Dermot as welcome as you’ve made us over the years.

Indeed, they’re back this summer, hosting the show for six weeks – much to the delight of fans