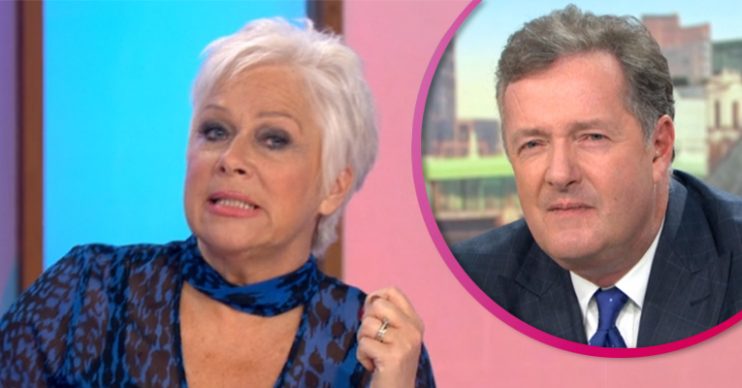 Denise Welch has made a dig at Piers Morgan over his continued criticism of the Duke and Duchess of Sussex.

On Monday morning’s Good Morning Britain, Piers branded the pair “spoilt brats” over their decision to step back from royal life.

Denise spoke about Piers’ comments on today’s Loose Women and insisted the royal couple “need to be protected” from the presenter.

Speaking about Meghan and Harry’s decision, Denise said: “I’ve been subject to trolling and when you’re at the centre of that storm it’s horrendous.

“She’s had that since day one. Everyone’s been saying, ‘she’s bringing down the royal family – she’s manipulating Prince Harry.’

“It’s a joint decision and Harry’s thought, in my opinion, ‘we’ve got one crack at life I’m not putting myself or you through what my mother went through, I’m not going to be the king but I will still volunteer my services to the family.'”

She continued: “To me, if we need to pay for their security, we need to protect them from Piers Morgan.”

Earlier this month, the couple announced they would be stepping away from their roles as senior royals and will work to become “financially independent” while still “fully supporting” the Queen.

At the start of the show, Piers said: “The Queen’s just had to fire her middle son, Andrew, over a pedophile scandal, her 98-year-old husband has been in and out of the hospital, he’s bed-bound at the moment.

In the wake of the Prince Harry and Meghan crisis, @piersmorgan just couldn’t wait to say… ‘I told you so’. 🙄#GMB pic.twitter.com/0c2ykJ3rQP

On Monday, Harry and William will join Her Majesty as well as Charles to discuss the Sussexes’ future.