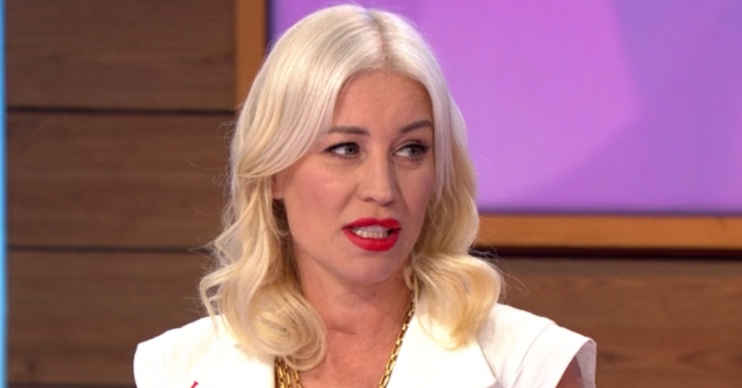 Does she know more than she is letting on?

Telly fave Denise Van Outen reckons one of her fellow performers on The Masked Singer is a pop star.

Denise, who was revealed to be the Fox during the latest episode of the ITV singing show on Saturday, seemed to drop a huge clue about the identity about one of the other secret performers earlier today when she appeared on Loose Women.

The 45-year-old ex Big Breakfast star hinted that a star from Little Mix could be assuming the role of Queen Bee.

Backing up her theory, Denise highlighted how the band were taking a break from touring when the primetime entertainment show featuring judges Jonathan Ross, Davina McCall, Rita Ora and Ken Jeong was filmed.

Queen Bee is one of only three disguised performers yet to be unmasked.

The others still remaining are the Hedgehog and the Octopus after Denise’s cover – and that of CeeLo Green, under the Monster mask – was blown.

I think Queen Bee is possibly one of the Little Mix girls.

Loose Women stars Christine Lampard, Denise Welch, Judi Love and Linda Robson all pleaded with Denise for clues about which famous faces are yet to be shown.

But Denise – who previously said she “enjoyed every minute” of her involvement – claimed she wasn’t entirely sure which other celebs were a part of the show, even though she has her suspicions.

She insisted: “I’m still playing the game because I have no idea who the celebrities are.”

However, Denise also suggested she could hear other acts readying themselves to perform in other rooms backstage.

“You could hear people singing and practising,” she said.

Miming the action of listening in, Denise added: “I had a glass like this against the wall!”

Surprise! Kept it to myself for weeks 🙊. Sneaky fox 🦊 🎤🐾. #themaskedsinger #surprise

Pressed further, Denise finally relented and admitted she believes she knows the identity of the Queen Bee.

“I’ve got my suspicions who I think it could be,” she told the panel and studio audience.

“I think Queen Bee is possibly one of the Little Mix girls.

“When we filmed the show Little Mix were on a break from their tour.”

Jade Thirwall has previously been tipped by some press reports to be participating on the show, but Nicola Roberts of Girls Aloud has also been speculated to be in the running.

Denise also pondered the possibility that Charlotte Church could be the person behind the Octopus and musical star Luke Evans could be the Hedgehog.

Following her unmasking, Denise shared with her social media fans how she wound up her daughter Betsy as her identity was revealed on TV.

As cunning as a Fox, indeed!

– Loose Women airs on ITV on weekdays from 12.30pm. The Masked Singer continues next Saturday on ITV at 7pm