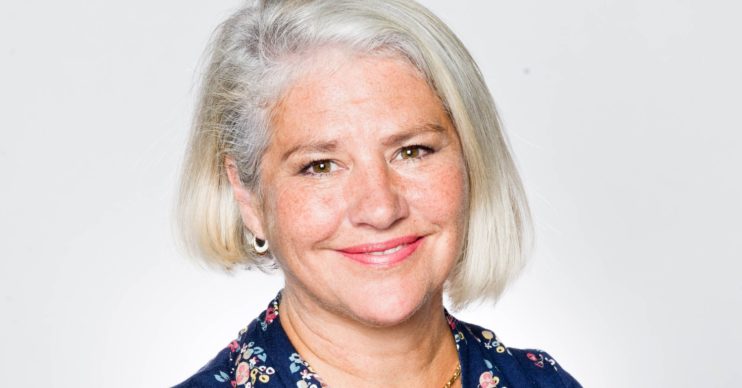 And who did she play in Emmerdale?

A familiar face pops up in Unforgotten this Monday (Match 15 2021) as Denise Black guest stars as June Marshall.

But how did her character Denise Osbourne leave Coronation Street?

And who did she play in Emmerdale?

Here’s everything you need to know about actress Denise Black.

Denise Black pops up in Unforgotten as June Marshall.

June is the senior police officer who worked on the case when victim Matthew Walsh was involved in an altercation – possibly with Ram Sidhu.

She remembers the case clearly because of the “colour of the probationer” and says it was dropped because her Sergeant wanted it “buried”.

Underneath the austere black and white uniform, soap viewers will recognise Denise Black from her roles as Joanie in Emmerdale and Denise in Corrie.

What else has Denise Black starred in?

Denise has been on our TV screens for more than three decades.

The English actress is best known for her roles in Coronation Street and Emmerdale.

She was one of the main cast members of the Channel 4 TV series Queer as Folk, written by Russell T Davies.

She played the role of Hazel Tyler in all 10 episodes of the show.

In January 2015, she made a guest appearance in Benidorm as Liam Conroy’s mother Gloria, attempting to lure him back to the UK.

As well as many roles on stage, Denise’s TV career includes appearances in Casualty, Where the Heart Is, A Touch of Frost, Waking the Dead, Dangerfield, The Bill, Bad Girls, New Tricks and Doc Martin amongst others.

How did Denise Black leave Corrie?

Denise Black has portrayed Denise Osbourne in Coronation Street from 1992 until 2017.

Ken had a relationship with hairdresser Denise in 1994 and the pair had a son called Daniel.

She agreed to marry Ken, despite having an affair with her brother-in-law Brian Dunkley (Benny Young) at the same time.

After finding out, Ken ordered Denise to leave, so she moved away with Brian and left Daniel in the care of Ken.

In 2017, Denise returned during an emotionally unstable period for son Daniel.

After holding Ken hostage, Daniel was arrested in connection with Ken’s assault and ultimately released without charge.

Denise decided to move to somewhere nearby so she could keep an eye on Daniel.

In October 2018, Denise found out (off-screen) that Daniel was engaged to Sinead Tinker and sent him a letter asking for an invitation to their wedding.

Despite this, she has not visited Daniel since or met her grandson Bertie Osbourne.

Nevertheless, fans are keen to see Denise back on the cobbles and the actress could return in the future.

What happened to Denise Black’s character in Emmerdale?

In June 2013, it was announced that Denise would be joining the cast of Emmerdale as Joanie Wright.

Joanie was the adoptive grandmother of Amy Wyatt’s son Kyle whom she gave away shortly after he was born.

She reprised the role on June 17 2015 as a regular cast member, before departing again permanently on January 30 2017.

Her character was killed off with a heart attack after being released from a short-stint in prison for assaulting a policeman.

How old is Denise Black?

She is currently 62 years old.

Is Denise Black married? Does she have children?

Denise met vocal coach Paul while with the Actor’s Touring Company and again in La Pasionaria.