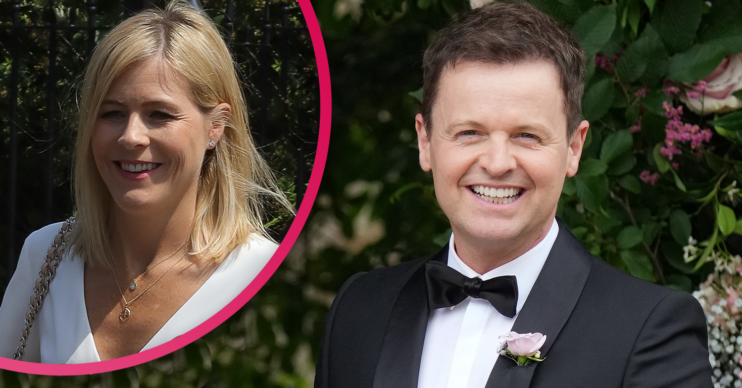 Declan Donnelly and wife Ali: When did they get married? How old is their child?

Declan Donnelly and wife Ali Astall have one of the strongest relationships in showbiz – but did you know that she’s also his manager?

Not only that, she worked with Ant McPartlin‘s second wife Anne-Marie, who was once his PA.

They’re certainly a close-knit foursome, with Saturday Night Takeaway host Dec and wife Ali preferring a quiet life away from the limelight.

Who is Declan Donnelly married to?

Dec is married to the gorgeous Ali Astall.

The pair worked with each other for a decade before they got together, with talent manager Ali working at James Grant Management.

I’m A Celebrity fans will have no doubt spotted Ali by Dec’s side as he filmed both in Wales and Australia.

Read more: Ant McPartlin holds back tears as he heads back to filming on BGT with Declan Donnelly

And the latter certainly has a place in Ali’s heart because she was born in Newcastle, Australia, back in 1978, which makes her 43 years old.

Even though she’s been in the public eye since her relationship with Dec was revealed, she tends to shy away from the limelight.

When did Declan Donnelly and wife Ali get married?

Speaking about how things developed between them, Dec previously told the Daily Express about their friendship.

He said: “We always hung out. When she was single and I was single we’d go out for dinner on Valentine’s Day together.

“Last year we went out as a couple. It was a little strange because we’ve had a working relationship for so long.”

Their wedding day in August 2015 took place in Newcastle, England, with Ant as best man.

Who was Declan Donnelly’s first wife?

Dec has only been married the once, but he has had some other pretty significant relationships.

The presenter was linked to Ashley Roberts and dated sports presenter Georgie Thompson for two years.

Dec dated actress Clare Buckfield for 11 years after they first met as teenagers.

They split in 2003, with Dec blaming their busy schedules for their eventual break-up.

Ali and I are thrilled to announce the arrival of our baby girl, Isla Elizabeth Anne, who was born just after 9 o’clock this morning. Mother and daughter both doing well, Dad is head over heels! D x pic.twitter.com/LZ409o6kYK

Does Declan Donnelly have a child with wife Ali?

Dec and Ali welcomed their daughter Isla on September 1 2018.

Isla is now three years old and Dec is certainly a doting dad.

Dec prefers to keep the tot away from the limelight, shielding her face from the public eye.

The Saturday Night Takeaway presenter broke the news of her arrival to his delighted fans on Twitter.

He said: “Ali and I are thrilled to announce the arrival of our baby girl, Isla Elizabeth Anne, who was born just after 9 o’clock this morning.

“Mother and daughter both doing well, Dad is head over heels.”

Where is Declan Donnelly from?

Declan Joesph Oliver Donnelly was born in Newcastle upon Tyne on September 25 1975.

Although he really doesn’t look (or act) it, he is currently 48 years old.

How tall is Declan Donnelly?

Dec is often the butt of the jokes over his height, which he takes in very good humour.

How did he become famous?

Dec has been in the public eye since the age of 12, when his father suggested he audition for new kids’ drama Byker Grove.

He won the part of Duncan in the show, based around a youth centre, and it’s where he met Ant (who played PJ) for the first time.

The pair stayed on the show from 1989 till 1993, building a friendship both on and off screen since.

Well… He’s been in a band if that counts – and they got nominated for two BRIT Awards.

They started their music career off the back of the show, releasing debut single Tonight I’m Free.

They followed it up with debut album Psyche, with the hugely popular hit Let’s Get Ready to Rhumble.

Their second album, Top Katz, wasn’t as much of a success and the boys rebranded into Ant and Dec and started to forge a path as presenters.

What have they presented?

They started out on kids’ TV, fronting SMTV Live with Cat Deeley.

It also spawned the miniseries Chums, which the trio revisited in a special Saturday Night Takeaway sketch last year.

After SMTV Live, the boys moved into game shows, fronting Friends Like These, PokerFace and Push The Button.

Talent shows such as Pop Idol and Britain’s Got Talent followed, as did entertainment shows including I’m A Celebrity and Saturday Night Takeaway.

They also fronted Ant and Dec’s DNA Journey, their own gameshow Limitless Win and even appeared in the film Love Actually.

Ant and Dec were also the stars of 2006’s Alien Autopsy.

They’ve also been in adverts or companies including Santander, Morrisons and Marks & Spencer.

Are Ant and Dec related?

Ant and Dec found out that they actually are related during the filming of their DNA Journey show.

The TV duo share the same DNA with a link through the bloodlines of their dads.

Read more: Ant and Dec in tears as they meet long-lost family on DNA Journey

“But it feels even deeper. Doing this show has made us look at each other in a different way.

“We respect each other more,” he said at the time.

The boys have come under some scrutiny as they continued to work very closely together during the pandemic.

When everyone else was social distancing they were as close as close can be.

And Dec explained why.

“Basically our households are connected and we form a cohort,” he said.

What happened when Ant and Dec pranked Bradley Walsh?

TV gold, that’s what – and they’ve managed to do it not once, but twice!

For an episode of Saturday Night Takeaway in 2020, Ant and Dec snuck behind the scenes at The Chase.

They emptied bins, strutted around backstage in heels and created a fake explosion all while Bradley Walsh was filming.

He got more and more exasperated as the noises went on before the boys finally showed themselves.

The first time the boys pranked Bradley was back in 2005, when they booked him for a fake corporate gig.

Given his body of work, it won’t surprise you to find out that Dec is rolling in it.

No, not the Stephen Mulhern gameshow, we’re talking about money – and lots of it.

Last summer it was reported that his net worth had risen to the highest it’s ever been – a whopping £27.5m.

Part of this is thanks to his own TV company, Deecourt Limited, raking in £2,255 per day.

He launched the company in 2006 and it’s only gone from strength to strength since then.

Ant and Dec own six companies together including Mitre Holdings – which has a £2.5m property in London to its name.

Mitre produces Limitless Win and Stephen Mulhern’s In For A Penny, among others.

Well, what a day! Thanks for all your kind words. D #obe pic.twitter.com/oQeYwaC2vE

Is Declan Donnelly an OBE?

He is indeed. Dec was given the honour alongside Ant in 2017.

Prince Charles presented the award and the pair were seen smiling together afterwards as they posed with their gongs.

They were given their OBEs for services to broadcasting and entertainment.

When the awards were announced, Ant and Dec said they were “shocked but incredibly honoured”.

They posed on Twitter: “We are thrilled, honoured and humbled to receive OBEs in Her Majesty’s Birthday Honours. Not to mention very shocked!!”

But that’s not the only award he’s been handed.

Ant and Dec have made National Television Awards history by pretty much ruling the Best Presenter category for two decades.

Last year’s ceremony saw the boys win the away for the 20th time.

Not only that, they’ve also walked away with the Most Popular Entertainment Show gong 11 times.

All in all, at the National Television Awards alone, the boys have so far won a staggering 43 awards.

This takes their total awards tally in all the years they’ve been presenting to 92.

Now we’re guessing this question is being asked on Google after Dec dropped random French words into his I’m A Celebrity commentary when David Ginola was in the camp.

However, we’re guessing the presenter only has very basic knowledge of the language.

One viewer commented: “Dec’s French is as good as mine!”

“Dec doing the random GCSE French phrases in the links is what I’m living for,” said another.

We’re not sure his French teacher would have been saying the same…!

When is Ant and Dec’s Saturday Night Takeaway on?

It starts on Saturday, February 19 at 7pm on ITV.