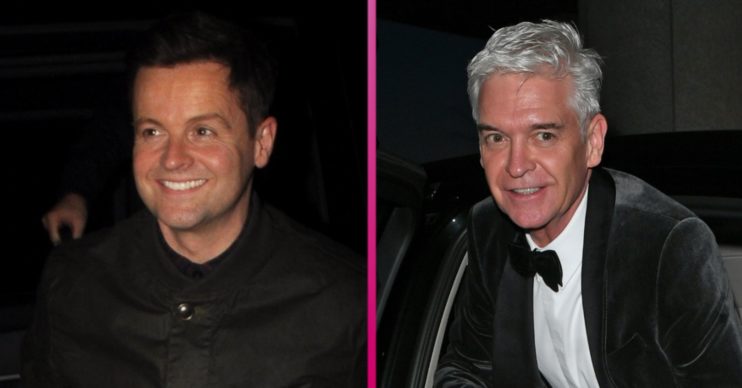 I’m A Celebrity: Declan Donnelly reveals he refused to host with Phillip Schofield

Declan Donnelly refused to co-host I’m A Celebrity with Phillip Schofield, he has admitted.

Dec, 44, was asked if he would consider presenting the show with Phillip when sidekick Ant McPartlin went into rehab.

But writing in the Geordie duo’s new book, Dec has said there was no way he would host I’m A Celeb with another male star.

Dec penned: “At first there was a lot of speculation as to who it would be, with people saying Stephen Mulhern or Phillip Schofield should get the job.

“But right from the very, very beginning there was no way I was going to host the show with another male.

“I didn’t want to have another man standing on the same side that Ant stood.”

Read more: Denise Welch jokes she is moving to commune in Portugal after Piers Morgan row

Upon reading his best pal’s words in Once Upon A Tyne, Ant, also 44, wrote that they “mean the bloody world”.

The series Dec was referring to was the 2018 instalment of the popular ITV1 reality series.

Months earlier, Ant announced that he was bowing out of the spotlight as he conquered his addiction to prescription drugs.

Holly Willoughby was eventually drafted in as Ant’s replacement. And she made it very clear she wasn’t nabbing Ant’s job forever.

In a statement at the time, Holly said: “I love Ant and want to send him my best wishes and support for a continued recovery.

“These are big shoes, not to fill, but just to keep warm for a little bit. I couldn’t be more excited to have been asked to stand alongside Dec for the next jungle adventure.”

Ant later returned to host I’m A Celebrity alongside best friend Dec for the 2019 series.

Meanwhile, this year’s series of the reality show is set to be quite different thanks to the coronavirus pandemic.

ITV recently confirmed that I’m A Celeb 2020 will be set at Gwrych Castle in north Wales.

Richard Cowles, ITV Studios’ Director of Entertainment, said: “The Australian jungle is such an integral part of the show it was a big challenge to find a UK location where we could continue to deliver what viewers love about I’m A Celebrity…Get Me Out of Here!