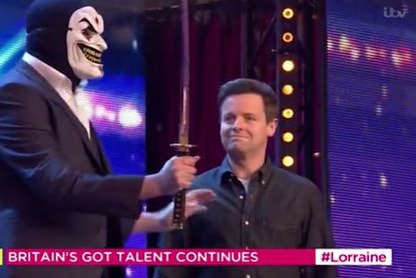 The host was pulled on stage

Declan Donnelly will be dragged on stage to help with a death-defying magic trick in the latest episode of Britain’s Got Talent.

In a new preview of the show, Dec looked nervous as he stood at the side of the stage with co-host Ant McPartlin and watched The Brotherhood audition.

The stunt act wore creepy masks and brandished a huge sword, for what could be one of the most dangerous routines ever seen on the ITV show.

Ant and Dec, both 43, watched tentatively as one of The Brotherhood sliced through a watermelon with ease with the weapon.

“Welcome to our game of mystery with this sword,” they uttered in an eerie voice.

Dec certainly looked nervous when a member of The Brotherhood then beckoned him onto the stage to help with their trick.

Passing the sword to an anxious-looking Dec, as Ant watched from the side lines, the masked performer said: “Dec, take this sword and place it upright under one of the boxes. We cannot see which box you choose.”

Putting the pressure on poor Dec, they added: “Our life is in your hands.”

As Dec took the giant knife he was visibly concerned and mouthed: “Me?”

Four boxes could be seen behind them on stage and Dec had to pick which one would seal the fate of the act.

Tune in to tomorrow’s show to find out what happened!

Britain’s Got Talent continues on Saturday on ITV.

What do you think of the new magic act? Leave us a comment on our Facebook page @EntertainmentDailyFix and let us know.