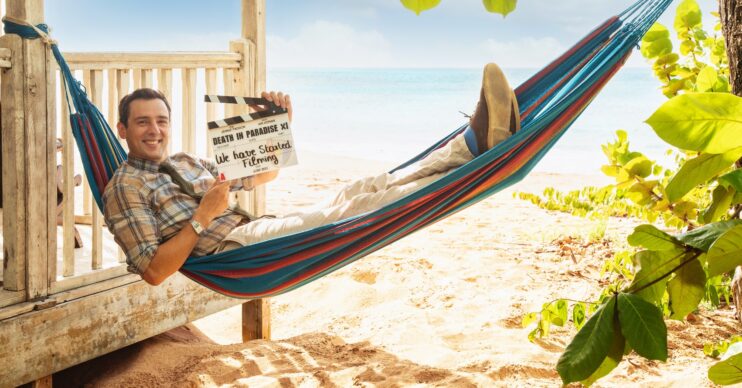 Welcome to the team!

The murder mystery series is a firm BBC favourite, with Little playing DI Neville Parker, the latest lead detective on the murder squad.

Lying in a hammock in sunny Guadeloupe, Little announced that he was back in business… and what’s more, he’s got a new sidekick.

Shantol Jackson will join the team as Naomi Thomas, an ambitious officer from a neighbouring Caribbean island.

Naomi will take over from Sargeant JP Hooper (Tobi Bakare) who left at the end of series 10 for a new life training police officers.

However, it looks like it will be far from plain sailing for the newcomer, who may be in over her head on the island with an unnaturally high death count and seriously creative killers.

Tim Key, executive producer, said: “We’re so excited to be back in Guadeloupe and calling action on our eleventh series – and also to welcome Shantol to the cast.

Read More: Check out the latest news on BBC dramas

“She’s an amazing addition to the team and we can’t wait for the audience to meet Naomi.

“We also can’t wait to share some huge surprises we’ve got in store – after the success of our tenth anniversary we’ve set the bar pretty high, so we’re pulling out all the stops to make this our best series yet.”

Josephine Jobert, Don Warrington, Tahj Miles, and Elizabeth Bourgine are all returning to this series.

Read More: Death in Paradise detectives ranked: Which of the BBC actors comes out on top?

Where have we seen Shantol Jackson before?

In 2018, she starred in the Idris Elba film Yardie, and in the same year appeared in Sprinter.

On her new role, Shantol says: “I’m so grateful for this amazing opportunity to join the cast of this fun-filled, entertaining series.

“I used to watch Death in Paradise with my dad in Jamaica years ago when it just started and to now be in the show, knowing that he’ll be watching me, it’s truly a surreal moment. Looking forward to adding to the magic!”

What will happen in Death In Paradise series 11?

Death In Paradise is known for its famous faces making guest appearances – and this series will be no exception.

As well as this, the team has teased ‘some familiar faces’ may make a comeback to stir up trouble.

At the end of season 10, Neville was on the verge of revealing his feelings to Florence Cassell.

Now viewers are dying to know what will happen – will there be romance in paradise for once?

We’ll have to wait to find out.

Death in Paradise is available on BBC iPlayer and Britbox.