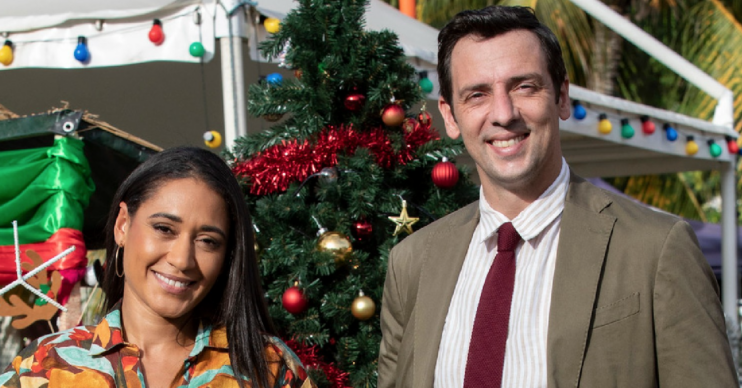 Death In Paradise is getting its first-ever Christmas special this year (hurrah!) and pictures released by the BBC look very exciting indeed.

There’s the prospect of a return for a major fan favourite!

Here’s everything you need to know ahead of the feature-length offering on Boxing Day evening.

What’s going to happen in the Death In Paradise Christmas special?

We left series 10 on a cliffhanger, with DI Neville Parker apparently about to reveal his true feelings DS Florence Cassell.

However, in this Yuletide episode, Florence is jetting off for Christmas, leaving the team a member down.

And wouldn’t you know it, there’s murder afoot on Saint Marie.

Neville is preparing to head to Manchester to spend the holiday with his family.

But his plans are abruptly changed when a billionaire shipping magnate dies in mysterious circumstances.

Things only get stranger when a minicab driver in London receives a Christmas card with an ominous message inside that turns the entire case on its head.

Who makes a return to the show?

With the team down a member, the Commissioner decides to enlists a familiar face…

That face is Dwayne Myers (Danny John-Jules). Yes, he’s back!

Alongside Marlon, Dwayne employs his unique style of policing to help investigate the case.

Left to their own devices, the pair struggles on the best plan of action for apprehending a suspect.

As rain falls, tensions rise – but as Christmas Day approaches, will they realise they’re more like one another than they originally thought?

The show has always been known for its procession of guest stars, and it has revealed the cast for the Christmas special.

However, on top of that quintet, we’re getting Ghosts’ Mathew Baynton and Juliet Stevenson (who we saw recently in The Long Call).

The Death In Paradise Christmas special airs on BBC One on Boxing Day at 7.30pm. You’ll also be able to catch in on BBC iPlayer. Hooray!