BBC viewers slammed the mother of an eight-year-old boy after it was suggested she could turn to the law to ensure he doesn't have to cut his fair to win a place at secondary school.

Bonnie Miller is said to be prepared to turn to the Equality and Human Rights Commission to ensure not a hair on the head of her Instagram-famous model boy Farouk James is touched.

But while many watchers of the Victoria Derbyshire show agreed with her stance on inflexible hair policies for schoolchildren, others felt the blogger was 'exploiting' her son and claimed she was searching for conflict, rather than a resolution. Her elder son previously experienced 'unfair treatment' at school for having his hair trimmed to a grade 1 cut.

There were also plenty of daytime TV viewers who agreed Farouk could be the victim of both racial and gender discrimination. 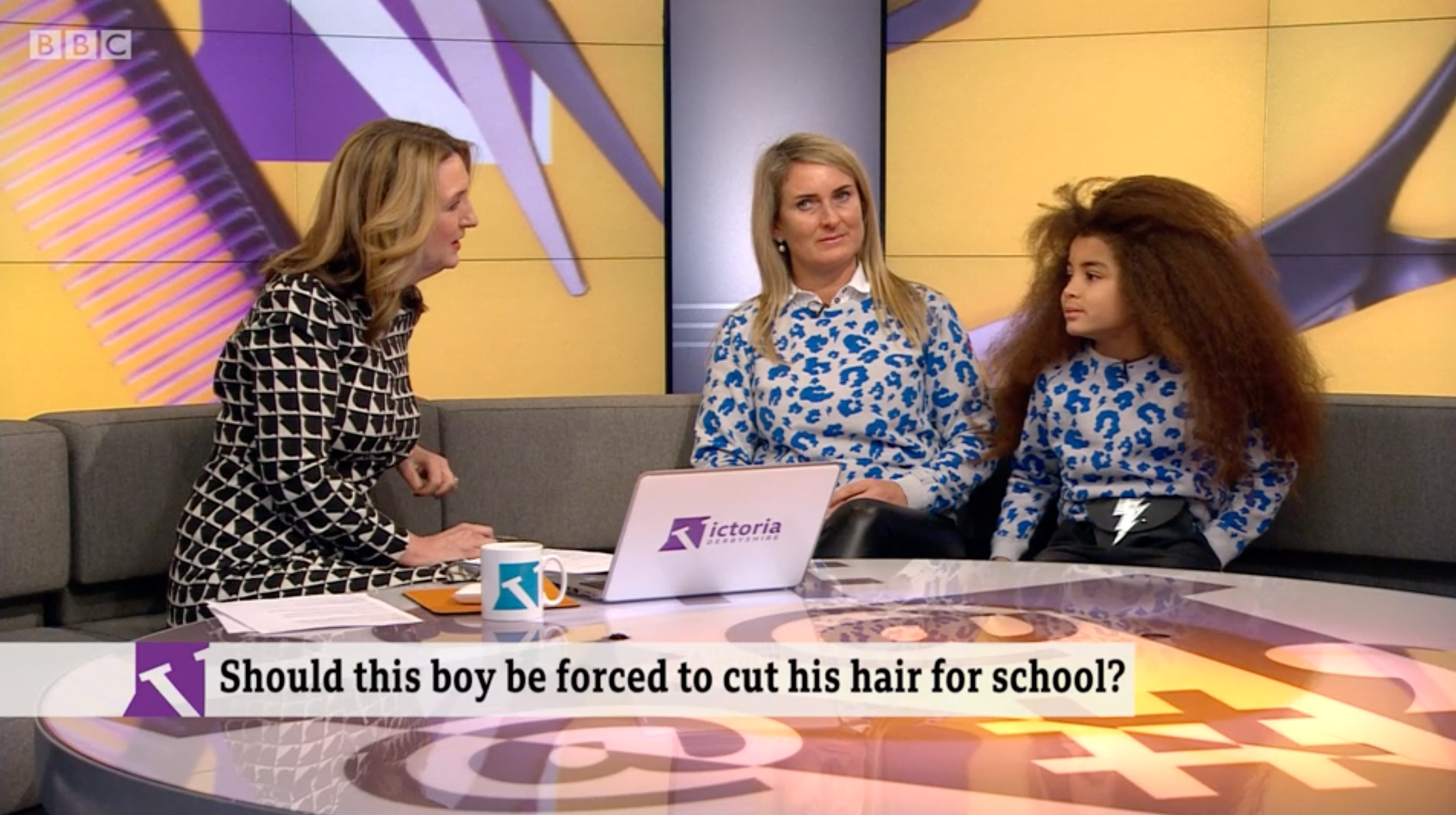 "They have one rule for girls, and one rule for boys. It’s sexist," Bonnie summarised her campaign at one point.

However, one unhappy viewer decided to represent their position on the matter by trying to shut down the debate.

The rules should be changed to accommodate him and many others.

"Why is this on BBC?" they wondered.

They continued with the bold claim: "The mother is exploiting her child obviously." 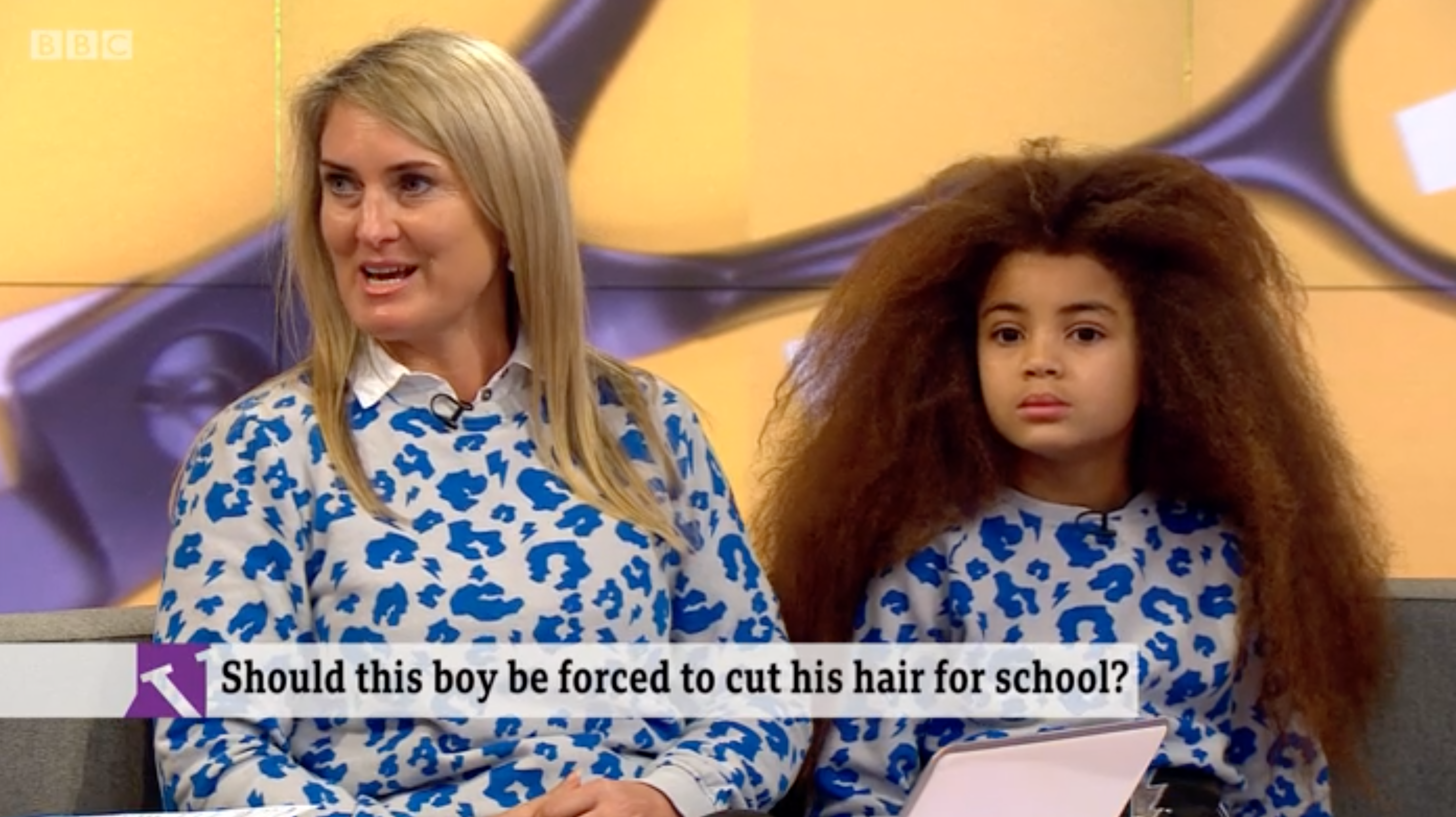 Read more: Lorraine 'lets slip' Caprice may NOT return to Dancing On Ice

"Mum needs to get a grip," chipped in another sceptic.

Another social media user insisted the school was right to enforce a uniform and appearance policy.

They wrote: "The school should and must be backed. School trying to impose discipline on boys and girls and should be backed by parents not undermined by them. The mum is so wrong."

Someone with a slightly softer approach half-agreed with that, but considered: "I appreciate he should be allowed to have his hair how he wants, but surely his mum knows he'll get neat [bleep] from day one if he goes to school like that." 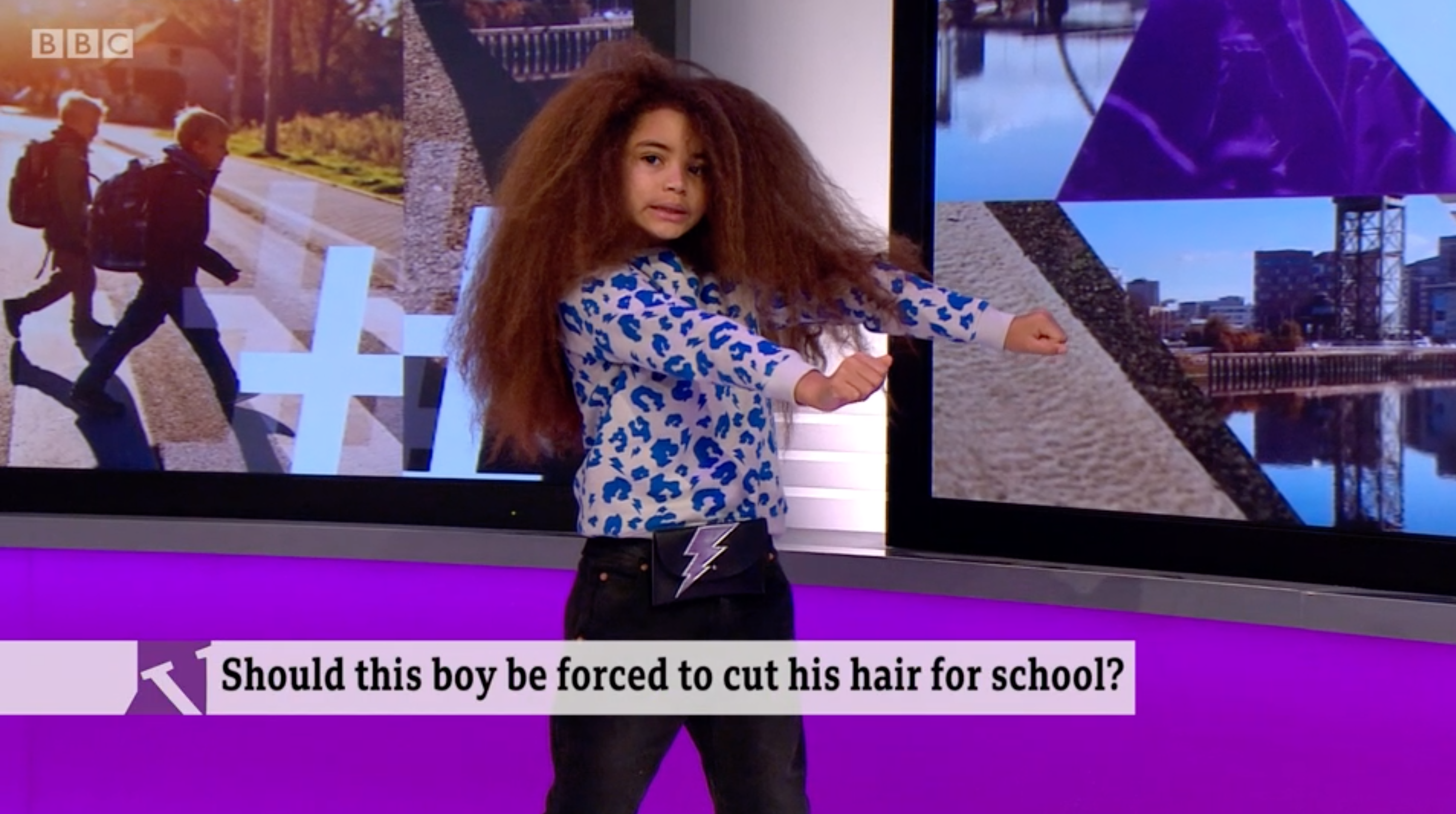 Farouk is currently only eight, though (Credit: BBC iPlayer)

But another Twitter fan dismissed the school's restrictions as 'unnecessary', asking: "What does hair length have to do with his ability to learn or the teachers ability to teach?

"As long as he keeps it tied back, when required to - nothing else should matter."

And another person with a similar view pointed out hair length has zero consequence on academic achievement.

Thank you @bbctwo for having us on the show. Together we will put an end to sex and race discriminatory bad hair policies in schools. #equalityandhumanrightscommission #reported #injustice #discrimination

"What kind of job wouldn't allow him long hair?" they wondered.

"I can think of the armed forces and that's it. I had long hair in my youth, never harmed my career or education."

And although another cynic sarcastically suggested any row could easily be defused with a very simple practical solution, they also came under fire for not appreciating the fundamental context for Farouk's hair.

“I love my hair because it’s unique"

Farouk James, 8, was told when he goes to secondary school he’ll have to cut off hair to get a place – as he’s a boy

His mum says she will report the schools to the Equality and Human Rights Commission https://t.co/GRAnA2oz7P pic.twitter.com/vZeAtmoQsK

The first person posted: "I know I'll grow my sons hair leave it all untamed and out of control. Then when folk criticise it because it looks ridiculous I'll go on TV embarrass him even more and cry like the snowflake that I am. Come on just tie it back. Problem solved."

But they were hit with the furious response: "Untamed? No it’s just Afro Caribbean hair - stop with this racist control!"

And another person agreed: "Yes, our hair is always being policed for how it grows naturally because of the texture.

Mostly it’s just us. Then I log into Instagram and I remember, we have you! 🙏🏽🥰 #appreciationpost #fightthepower #standup #equality #equalrights #stopbullying #ho'oponopono #thankyou #manifestation #lawsofattraction

"The young man's hair could be plaited or put into another style. I don't understand why that would pose a problem for any school."

A third added: "The rules should be changed to accommodate him and many others.

"He should not have to cut his hair. This goes further than a debate about hair, it is about identity and culture and the misunderstandings of both."

Bonnie Miller has been told by secondary schools that her son, Farouk James, will have to cut his long hair to get a place.

She says she's pursuing a law suit against two of the schoolshttps://t.co/GRAnA2oz7P pic.twitter.com/dUEEXpSMHw

- Victoria Derbyshire airs on BBC Two on weekdays from 10am