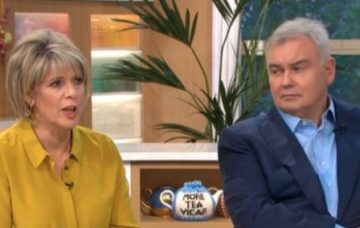 This Morning viewers shocked by agony aunt’s advice to cheater

This Morning viewers have shared their shock after a man who cheated on his partner was advised not to tell her.

During a call-in on Friday’s show, Eamonn Holmes read out a message from a viewer called ‘Dan’ who wanted help on how to tell his partner about what happened.

“This is from Dan. He says, ‘Last weekend I was at a stag party and I ended up sleeping with the stripper. How do I break this news to my partner?”

Eamonn then said: “Why would you want to break that news to your partner? She will just break your neck.”

Agony aunt Deidre Sanders interjected to tell Eamonn: “She might not. It’s amazing how tolerant some women are. They swallow the hurt into themselves rather than actually act out angrily.”

Addressing Dan, Deidre continued: “I would say Dan, I know you feel guilty, but why tell her? You behaved really, really wrongly. I’m in no way excusing it.

“But if you tell her about it and confess it, you’re sort of going, ‘I did this terrible thing and I want you comfort me and say it’s all okay and our relationship is going to survive’. Don’t do that.

“Suck it up. Swallow down that guilt. You deal with it and you learn from that to never, ever behave like that again. That’s the important thing. You don’t repeat it.”

Ruth Langsford then said: “I think that’s just like the guilt offloading to me. Like, ‘I feel really bad, so I’ll stick it all in your lap and you deal with it’ so, Dan, I would say big mistake but don’t do it.”

But not all viewers agreed, with some taking to Twitter to say they felt Dan should come clean and his partner deserves to know the truth.

One viewer said they were “puzz

The subject of Friday’s This Morning phone-in was whether anybody should ever forgive a cheating partner.

What did you think of the advice to Dan? Leave us a comment on our Facebook page @EntertainmentDailyFix and let us know what you think!