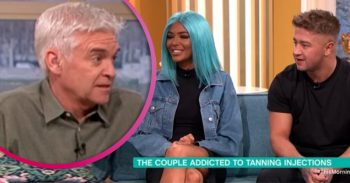 A couple addicted to tanning injections were shocked as Phillip Schofield gave them a warning on This Morning.

Hannah Tittensor and her boyfriend Ben Dunlop appeared on Monday’s show and said they love their dark skin tones and go to desperate measures to keep it topped up.

The pair, from Belfast, met when they were 17 after they had got into self-tanning products.

Ben revealed he was the first to jump on the tan bandwagon.

He said: “I was 15 when I started using sunbeds. I just always like being tanned. Me and my family went on holiday when we were younger and compere who got the darkest.

Speaking about switching from sunbeds to illegal tanning injections, Hannah said: “[My brother] just came in one day and he was a completely different colour.

“We were like: ‘What happened?’ He was like: ‘It was tanning injections’ and obviously then Ben had to try them.”

Hannah admitted she didn’t try them for a year as she was anxious about it, and had a reaction during her first go.

She said: “The first time I tried it, it made me feel quite sick. It’s like a cold sensation in my stomach for a few days, then it went away.”

However, host Phil warned: “The NHS say anyone injecting melanotan should stop doing so immediately for their own safety, the drug has not been tested.

“How does that make you feel – you should stop this immediately.”

A shocked Hannah replied: “I wasn’t aware of that at all, I think I would be able to stop, possibly soon it’s time to stop.”

Ben, however, didn’t seem too keen on stopping just yet.

He added: “I might stop one day, but I just love being tanned, we worry about cancer, but there’s people out there smoking 40 cigarettes a day.”

Viewers watching from home were gobsmacked by the pair.

One person wrote on Twitter: “I’m assuming this pair are on #ThisMorning as some sort of public health warning regarding the dangers of tanning injections? They need help to cope with addiction disorders.”

I’m assuming this pair are on #ThisMorning as some sort of public health warning regarding the dangers of tanning injections? They need help to cope with addiction disorders.

Another wrote: “Why would you not check the facts on tanning injections before having them? #ThisMorning,” while a third added: “Crikey. These two are nuts. Tanning Injections?? #ThisMorning.”

Why would you not check the facts on tanning injections before having them? 🤔🙄 #ThisMorning