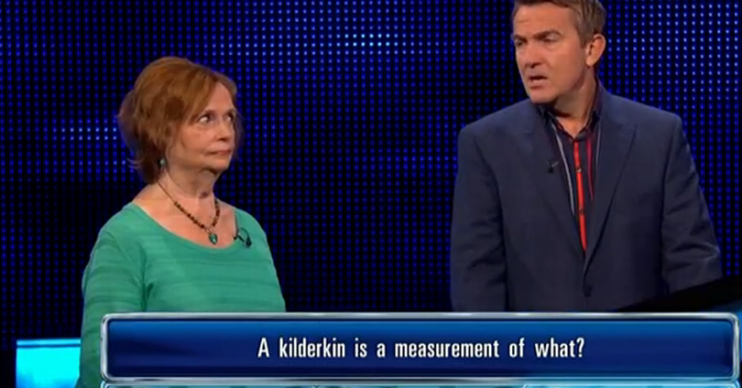 We'd have been terrified!

The Chase’s Mark Labbett broke an unwritten rule on the ITV quiz show, when he was forced to help a contestant with their answer.

Even host Bradley Walsh intervened when a guest on Wednesday (August 7) looked like she was going to needlessly lose a point.

In fact, both the presenter AND the chaser ended up warning contestant Shirley when she looked set to make an embarrassing blunder on the afternoon show.

Shirley joined Elaine, Jacob and Ian on the team, and it started well for the 79-year-old Londoner.

The retired TV casting director performed well in her cash-builder round, winning £5,000, but it all went a bit wrong when she faced chaser Mark Labbett – aka The Beast.

On her very first question, Shirley was asked: “A kilderkin is a measurement of what?”

The answer was either time, speed or capacity.

However, a confused Shirley blurted out the answer “capacity” without pressing the button.

As the clock counted down, Mark was forced to shout: “Well then, press the button!”

Holding his head in his hands, he reprimanded her by saying: “I don’t want to win THAT way.”

Shirley apologised several times, while Bradley reminded her: “So Shirley you must press the buttons!”

Fans watching from home couldn’t resist giggling about Shirley’s near disaster, with one tweeting: “Hahaha the poor thing saying the answer out loud. Do you not watch the show love? Bless her #TheChase.”

Hahaha the poor thing saying the answer out loud. Do you not watch the show love?? 😅. Bless her #TheChase

Has she watched the show bless her?? 😂 #TheChase

Classic moment from Shirley.. Forgot to press a button and just said the answer out loud..😂🤣😂#thechase

Another said: “Have a lot of time for the elderly, but Shirley would try my patience.”

A third asked if Shirley was “awake”, and another typed: “Classic moment from Shirley. Forgot to press a button and just said the answer out loud.”

Despite this mishap, Shirley quickly composed herself and was able to join fellow contestant Ian for the final chase.

Do you enjoy The Chase? Leave us a comment on our Facebook page @EntertainmentDailyFix and let us know what you think!