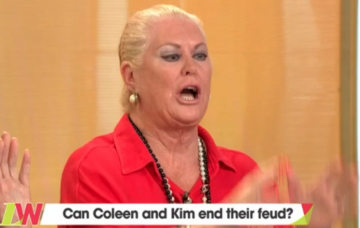 She said she feels "disappointed" over the incident

The star says she appeared on Loose Women in the hope of drawing a line under her feud with panellist Coleen Nolan, after falling out on last year’s Celebrity Big Brother.

However, that didn’t happen and instead Kim ended up storming off set after a row, calling Coleen “trash”.

Now, a representative for Kim has told ED! that Kim felt “out of her depth” during the chat because she was told Coleen would be talking first.

They told us: “Kim was invited onto Loose Women as she was told Coleen wanted to hold peace talks with her.

When Kim arrived on the set, she said she’d been reluctant to come on Loose Women but Coleen wanted to bury the hatchet.

Coleen then spoke out, saying she agrees with Kim that she was “two-faced” with her in the CBB house. She also suggested Kim’s game plan was to make it look like she was being “bullied” in the house.

Coleen claimed Kim “just wanted to have a go at people all the time”, calling her “antagonistic” and wanting rows.

Coleen’s sister Linda Nolan chipped in to suggest Kim had “no talent”, with Kim replying: “That shows how stupid you are.”