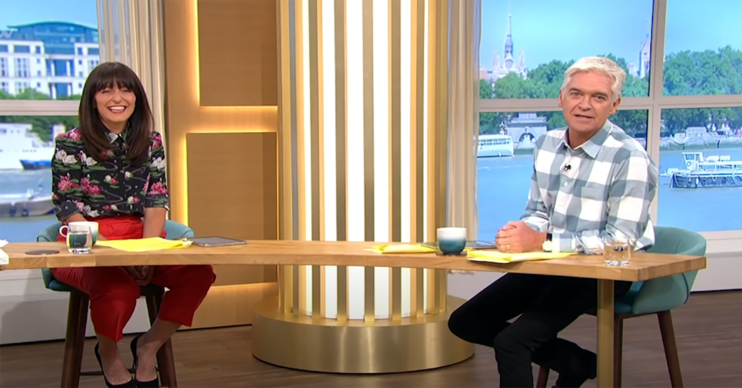 She almost wet herself!

Davina McCall and Phillip Schofield were in hysterics as they watched Josie Gibson go on a rollercoaster on This Morning today.

The former Big Brother winner took a ride on ICON at Blackpool Pleasure Beach as she showed how theme parks have changed amid the coronavirus pandemic.

However, it looked like the rollercoaster from hell and Josie even threatened to quit midway through.

As she approached the rollercoaster, Josie told the hosts: “You never told me this.

Since I’ve had a baby, I’m scared of absolutely everything.

“I’m going to be on this rollercoaster now and I’ll tell you what, I haven’t had a ride in such a long time.”

She continued: “It’s about time I got the adrenaline pumping actually. Here we are,” as she sat in the carriage.

Josie added: “Since I’ve had a baby, I’m scared of absolutely everything.

“It’s very important that I wear my mask but believe me, I’ve got a bone to pick with you guys.”

As the rollercoaster got ready to go, Josie asked: “Oh my tummy is going already, is there any way I can pull out? Why do you do this to me?”

The rollercoaster then began and it wasn’t long before Josie was screaming.

Seems like @Josiestweet really enjoyed her ride on ICON at Blackpool Pleasure Beach – but where should we send her next? What's the scariest roller coaster you've been on?

Find out why @Schofe and @ThisisDavina picked it as their Best Bit on the app!

She shouted: “Oh my God!” as she began doing loops.

At one point, her mask was pushed up over her eyes leaving her unable to see as the rollercoaster continued to loop.

Davina and Phil burst into laughter as he said: “It’s over her eyes!”

As the ride came to an end, Josie said: “That’s not good to do after having a baby, I tell ya.

“I shan’t be doing that again. After having a baby, it’s quite hard to go on a roller coaster.

“Does anyone know where the toilets are?”

Phil joked they had sky-diving lined up for her tomorrow and Josie said: “Go and book somebody else.”

Viewers were also in hysterics with one person writing on Twitter: “Sorry Josie but I was crying laughing at you on the rollercoaster.”

#ThisMorning. Sorry Josie but I was crying laughing at u on the rollercoaster 🤣

Another said: “Crying at Josie live on that ride trying to keep her mask on.”

Would you go on the rollercoaster? Leave us a comment on our Facebook page @EntertainmentDailyFix and let us know what you think of this story.