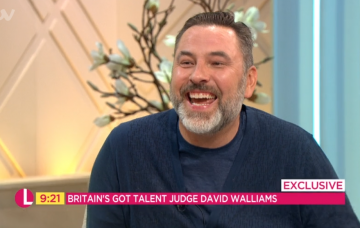 It was all in jest!

David Walliams opened up about his competitive and “weird” relationship with Simon Cowell on Wednesday’s Lorraine.

The Britain’s Got Talent judge, 46, admitted he once jokingly told X Factor boss Simon that his son Eric, four, would need “plastic surgery” to be as good looking as David’s son Alfred.

Joined by his pet dog, David recalled a moment when Simon, 58, had asked him whose son was better looking, Eric or David’s five-year-old little boy Alfred, who he shares with his ex Lara Stone.

Host Lorraine Kelly had asked David if it ever gets competitive between himself and Simon.

He then joked: “He even said to me one day, ‘who do you think is more better looking, my son or your son?’ I said, ‘Well my son is obviously better looking but the good thing is you’re rich so you can pay for your son to have plastic surgery.’”

Lorraine burst into laughter as David could barely finish his sentence because he was also giggling.

Of course, it was all in jest and David didn’t obviously mean it.

Lorraine asked: “You didn’t say that?!” to which David replied: “Yes I did!”

But David said there’s nothing he and Simon wouldn’t say to each other – and they’re constantly exchanging banter.

“It’s a really weird relationship and very genuine,” he added.

David also spoke about the possiblity of an X-rated version of BGT because there are so many jokes that viewers miss.

He said: “There is stuff that never makes the edit which on the day was really, really funny.

“We really want to one day do an X-rated version of the show where we can really say what we think,” David added.

“I think it would finish our careers for good.”

Do you enjoy watching David and Simon on BGT? Leave us a comment on our Facebook page @EntertainmentDailyFix and let us know what you think!