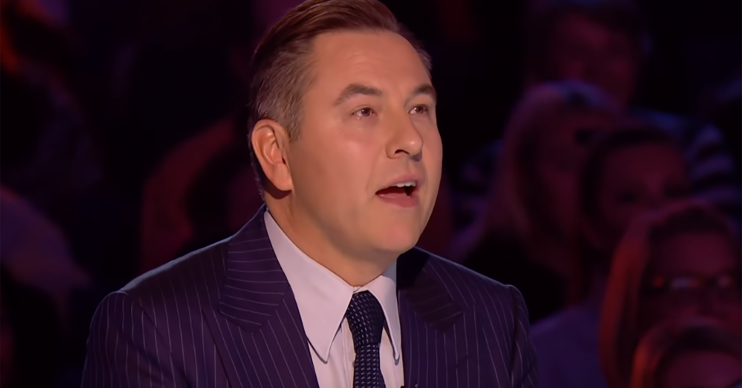 David said it was "scary"

David Walliams has revealed the moment a Britain’s Got Talent stuntman almost hurt his privates.

The judge, 48, will join co-stars Simon Cowell, Amanda Holden and Alesha Dixon for a brand new series this weekend.

However, David has said one “scary” act left him fearing he was going to get his packed lunch hurt!

David said: “It was quite scary because I had never seen that guy before. I mean, I’m assuming he’s good at what he does!

It was quite scary because I had never seen that guy before.

“I was told that I had to remain completely still so I couldn’t really see what was going on because all I could do is just stare up at the ceiling.

“It was quite scary because I didn’t really know what he was doing but I just put my trust in the show that I wasn’t going to get hurt.”

He added: “I mean I just guessed that if the producers were up for it then there was a good chance he wasn’t going to hurt me.”

Host Ant McPartlin added: “We spoke to David afterwards and the guy on the motorbike was really winding him up.

“Revving it next to his head and edging back into his privates, taunting him a bit, which was fun! I liked him!”

Dec Donnelly added: “He was great! And it’s nice to have a bit of danger.

“It makes it even better when one of the judges are involved!”

David added that he thinks it was “pleasurable for Simon to see me in danger”.

This year’s series will only air the auditions while the live shows will be postponed amid the coronavirus pandemic.

It's official! Britain's Got Talent is BACK – Easter Saturday at 8pm on @ITV and @WeAreSTV 🙌

ITV said in a statement: “The Britain’s Got Talent audition shows are due to be broadcast in the next few weeks as planned.”

The show has been “working with brilliant production teams” to find a way of “making the live finals work”, which were due to broadcast at the end of May.

“However, in light of the latest government health guidelines, production of the live shows cannot go ahead as planned,” it added.

The statement concluded that the live finals will therefore broadcast “later in the year”.

The new series of Britain’s Got Talent airs on ITV, Saturday, April 11, at 8pm.

Are you looking forward to the new series? Head to our Facebook page @EntertainmentDailyFix and let us know.