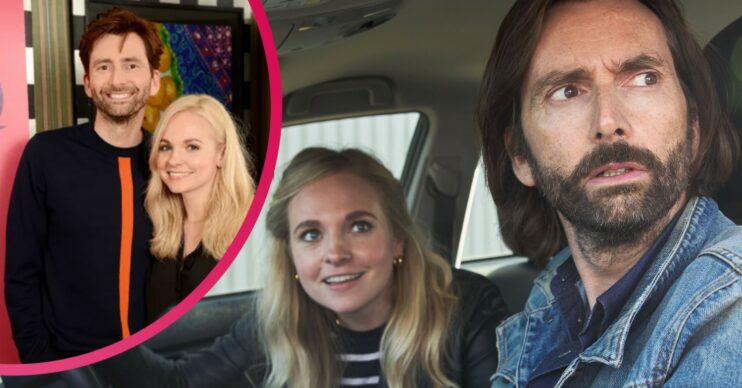 The horror series is coming to a screen near you soon!

David Tennant is to star opposite his wife Georgia in a brand new TV show called Hide.

The series is described as a modern-day twist on the Jekyll and Hyde story.

Here’s everything we know so far about the upcoming horror/thriller.

The new series is described as “a Jekyll and Hyde tale by way of a conspiracy thriller”.

He finds himself investigating a story that he believes could put his career back on track.

Of course, things don’t quite go to plan, though…

David’s character soon finds himself on the run from some sinister enemies who are desperate to silence him.

Hide – what else do we know?

According to the synopsis, while he’s on the run, he has “a serious accident which has an extraordinary side effect”.

He then realises there are monsters in the world…

Worst of all, he may be one of them.

David is no stranger to playing monsters.

The actor and father of five, 50, portrayed killer Dennis Nilsen in ITV1’s Des.

As reported by Deadline, David Tennant also acts as an executive producer on the series.

He said: “One of my earliest jobs was playing ‘first policeman’ in a BBC radio adaptation of Dr Jekyll and Mr Hyde.

“I read the book many years ago and I’ve been fascinated with this character for as long as I can remember.

“This story has followed me around for years, tapping on my shoulder slightly impatiently.”

He added: “When Julie Anne [Robinson] approached me to talk about re-imagining it for the 21st century, alongside her, the magnificent Fazekas and Butters and with the ever-brilliant Georgia Tennant, I didn’t let her finish the sentence.

“I couldn’t be more thrilled to be playing this character, telling this story and working with these people.”

Is Hide based on the Jekyll and Hyde book?

The now famous tale has been adapted many times for film and TV – including a BBC adaptation starring James Nesbitt.

The original story follows the terrifying plight of Dr Jekyll, a well-respected scientist, who transforms into the evil Mr Hyde after an experiment.

The David Tennant and Georgia Tennant version Hide, is a new re-imagining of the classic.

Director and executive producer Julie Anne Robinson said of the project: “I am ecstatic to have this opportunity to work with such creative and talented individuals.

“The Jekyll and Hyde story is a classic, and it is so thrilling to be bringing a new and exciting iteration to the screen with such brilliant collaborators.”

Who else is in Hide alongside David and Georgia Tennant?

No other casting news has been revealed as yet.

David and Georgia, 36, have worked together before, of course.

Most recently, the married couple starred together in BBC’s Staged, which was filmed during lockdown last year.

They have also appeared alongside each other in series four of Doctor Who, with Georgia playing the Doctor’s daughter.

The couple met on the set of the sci-fi show.

TV fans will know that Georgia is the real-life daughter of Fifth Doctor Peter Davison.

When will Hide start?

As it is in early development, there is currently no air date for Hide.

David Tennant recently won the Best Drama Performance award at the National Television Awards for his role in Des.

He thanked his wife Georgia for her support during the filming of his crime drama, where he played serial killer Dennis Nilsen.

Taking to the stage at London’s 02 Arena on Thursday September 10 2021, the Scottish actor thanked his wife for “putting up with me”.

The couple married in December 2011 and share five children together.

Hide is expected to air sometime in 2022.

Are you a fan of David Tennant? Will you be tuning in to Hide? Leave us a comment on our Facebook page @EntertainmentDailyFix.