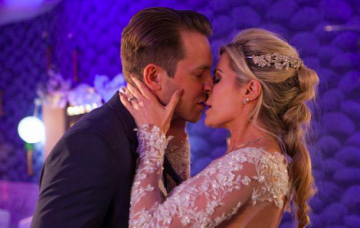 They ain't loving it

The steamy affair between Darren Osborne and Mandy Richardson in Hollyoaks isn’t a hit with fans of the Channel 4 soap.

The veteran characters have been hooking up behind the backs of their partners, Nancy Osborne and Luke Morgan, since Darren comforted Mandy over her ruined wedding dress last year.

It started with a kiss (as is the case with most illicit relationships) but it wasn’t long before they were tearing each other’s clothes off, even getting it on after Mandy’s wedding to Luke was ruined by his secret son turning up at the reception.

Since then, they’ve tried to keep away from each other, but have found it pretty much impossible.

And it looks like their naughty fling could be exposed as they’re caught on CCTV on Monday’s Channel 4 episode when they arrange to meet at The Bean, not knowing Esther Bloom has rigged up security cameras.

Neither character is a stranger to a bit of devious cheating – Mandy previously cheated on Luke with his own brother Adam and Darren did the dirty with Sienna (although he soon lived to regret that) – but fans just aren’t into this current infidelity.

They took to Twitter to rant about the affair.

“@Hollyoaks seriously stop it with this Mandy and Darren storyline. It’s not good entertainment it’s depressing,” complained one disillusioned viewer.

“Darren and Mandy need to stop,” snapped another.

A third added: “Oh and as for Darren & Mandy. Ew ew ew no no no” while a fourth commented: “Can we stop this Mandy and Darren affair.”

The steamy couple soon realise they’ve been spotted, leading Mandy to panic as she realises everything they both have to lose if word of thier fling gets out.

But despite this actress Sarah Jayne Dunn isn’t sure it will be enough for Darren and Mandy to stay away from each other.

She said: “The attraction and chemistry between Mandy and Darren is strong, so who knows if they’ll be able to resist temptation…”

What do you think of Darren and Mandy’s affair?