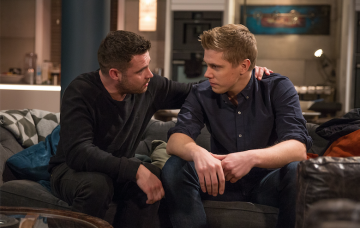 Robron fans can all relax because Danny Miller AKA Emmerdale’s Aaron Dingle has confirmed Ryan Hawley – Robert Sugden – is NOT leaving the ITV soap.

Read more: Emmerdale’s Ryan Hawley says he wants a break from the soap

Fans of the soap’s golden couple were sent into panic-mode yesterday when Ryan commented that he’d quite like to take a break because filming has been so intense for him over the last year.

He told OK! magazine: “It’s been a busy year. I feel like I haven’t stopped.

“It would be nice to have a bit of a break. And slow things down. But I think we’re going to be quite busy later in the year as well.

“I think over the past four years there hasn’t been a moment when Robert hasn’t been stressing; either cheating on someone, hiding a death, a pregnancy, trying to get someone to have an abortion.”

Worried Robron fans thought he meant the recently reconciled pair would split again – with Ryan hinting he could be ready to leave the Dales.

Danny took to Instagram to stem the mass hysteria.

He said in his story: “I don’t know how many times I have to say this, so I’m going to say it in a deep Northern Irish accent in hope that the point sticks a little bit more, a wee bit more.

“You’ll remember what I’m trying to say because it’s a little bit more intimidating. So, here it goes: Don’t just make a conclusion from a headline. Open the paper, read the content, and it’ll give you a wee bit better idea of what’s actually going on!”