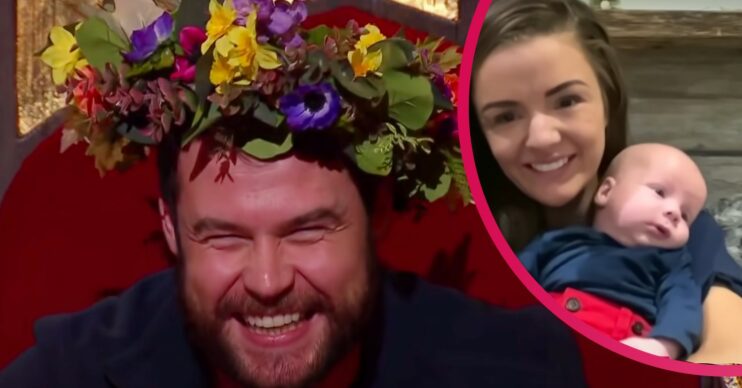 The star was finally reunited with his family today

Danny Miller shared a heartwarming snap with his baby son after reuniting with his family today (Monday, December 13).

Danny was finally reunited with his family after three long weeks away following his I’m A Celebrity win last night (Sunday, December 12).

What has Danny Miller been up to over the last day?

I’m A Celebrity’s 21st series came to an end last night, with Emmerdale star Danny announced as the winner.

He managed to fend off Coronation Street legend Simon Gregson, who finished second, and Frankie Bridge, to win the crown.

Following his victory, Danny said: “I can’t believe it. I’m speechless for once.

“Thank you so much, this is the best thing that’s ever happened to me bar my son,” he continued.

This morning (Monday, December 13), Danny was briefly reunited (sort of) with his wife-to-be Steph and son, Albert, on Lorraine.

Danny appeared on the show via video call, and spoke to the host about his I’m A Celebrity win. During the interview, he told Lorraine he was a little “tired and tipsy”.

“It’s so lovely to see you,” Lorraine Kelly said. “But we’re also joined by your fiancée Steph and wee baby Albert.”

Danny’s partner, Steph, then appeared on-screen alongside the couple’s son, Albert, who was born in October.

“We’ve missed you so much, Danny. We just want you to come home now,” Steph told Danny during their emotional virtual- reunion.

Steph, 30, got her wish this afternoon as Danny finally returned home after his stint in Gwyrch Castle.

Danny shared the heartwarming reunion he shared with his son on his Instagram today for his 613,000 followers to see.

The photo shows Danny holding baby Albert in his lap. The soap star is seen planting a delicate kiss on the seven-week old’s head.

The caption of the adorable photo simply reads: “Danny’s home.”

Danny’s followers flooded the comments with their congratulations and well-wishes following the star’s reunion with his family.

What did Danny Miller’s fans say about his post?

“Hi Honey. This must be everything in your life right now. Home, your family, your well-deserved win,” fellow campmate Arlene Phillips wrote.

“This is so sweet and well done Danny for becoming king of the castle,” one fan said.

“King Danny. You were amazing,” another commented. “Enjoy every second with your beautiful family.”

Earlier today, Danny revealed that his involvement in I’m A Celebrity was to provide for Albert and his family.

“Steph was the massive reason for me doing it. She was the reason that I did it,” Danny told Lorraine.

“She [Steph] was the reason that made me think, ‘I’m going to go out there and provide for the family,” he continued. “I wasn’t in the position to do that before the show. I did it to financially secure the family.”

What did you think of Danny’s heartwarming reunion? Head to our Facebook page @EntertainmentDailyFix and let us know!