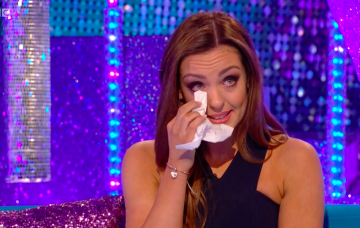 It was a hard interview to watch

It’s traditional for the eliminated couple to do an exit interview on Strictly Come Dancing spin-off show, It Takes Two, but actor Danny John-Jules “decided” not to appear on Monday night’s show.

After weeks of rumours surrounding his backstage rants and Twitter meltdowns, his dance partner Amy Dowden was interviewed alone, and broke down, saying: “I told myself I’m not going to cry tonight.”

Amy, 27, looked nervous as she admitted the elimination “didn’t come as a shock.”

Presenter Zoe Ball then showed her a moving montage of her time on the BBC show, and the Welsh star started crying.

Zoe handed her a box of tissues, telling her: “I know, it’s an emotional night.”

The professional dancer tried to smile through the tears and continue with the interview, praising the Red Dwarf star’s dancing skills.

“I’m so proud of Danny. He is such a talented performer. Danny, you belong there and I hope to see you on the stage performing very soon,” she said.

Zoe then finished the chat by addressing the missing star directly.

Speaking to the camera, she said: “Danny, so disappointed you couldn’t be here tonight.”

The no-show followed an awkward few weeks of headlines about backstage tension and a reported argument with Amy during rehearsals.

The dancer was forced to deny she’d felt “threatened”, saying: “Things did get a little bit intense the other day in rehearsal, but you know what, we took a half-hour break and then got straight to it.

“I never felt bullied or threatened by Danny.”

After their exit from the show it was then claimed the actor had ranted at the after-show party on Sunday night.

Insiders told The Sun: “Danny lashed out at the judges, calling them imbeciles, and told friends and family he would have won the show.

They added: “Danny is also saying he is refusing to do the Strictly tour because of the backlash and that, in his words, he’s ‘done with the show’.”

The TV star later retweeted a string of messages accusing the show of a vendetta against him.

But he also spoke out to personally thank Amy, tweeting: “I should have expressed my gratitude more often. You truly inspired me.

“I thank you from the bottom of my heart for the knowledge I have taken away with me, courtesy of your good self.”

This is a sad way to end Danny’s time on the show.

What do you think of Danny’s no-show? Leave us a comment on our Facebook page @EntertainmentDailyFix and let us know what you think.