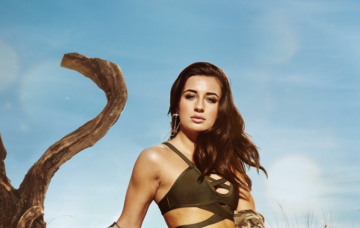 So gutting after all her preparation

Danny Dyer’s daughter Dani Mas Dyer had to leave TV show Survival Of The Fittest after just one episode – after she dislocated her shoulder.

The 21-year-old was one of the best known signings for the show, billed as a new take on Love Island.

The barmaid, who was sent to hospital and will be replaced in the ITV2 series, which is hosted by Laura Whitmore, said she was “absolutely gutted”.

An ITV spokesman said: “Dani injured her shoulder during the recording of a challenge. She was attended to by on-site medics and taken to hospital as a precautionary measure.

Read more: Laura Whitmore on how she fell for Love Island beau

“As Survival Of The Fittest involves physical challenges which she wouldn’t be able to take part in, Dani isn’t in a position to be able to return to The Lodge and will therefore leave the show.”

The barmaid, who was injured in a challenge which involved descending a slide at the start of an obstacle course, said: “For medical reasons, I can’t take part in any of the challenges because I am no use in a sling.

“I will just be sitting around and not be able to compete and I’m not meant to move (my arm) for a week so it wouldn’t be fair and there is just no point.

“I’ll just be an extra spare part if I carry on like this.”

She added: “I haven’t stopped training since Christmas. I’ve been dieting. I did Tough Mudder last year and I didn’t even hurt myself then.

“I’ve been constantly training up until now and now I’ve gone and dislocated my shoulder. It is what it is I suppose.

“My experience in the lead up to going into The Lodge was just amazing, I can’t put it into words how amazing it was so I am absolutely gutted that I can’t do any of the challenges.

“If I could go back and not dislocate my shoulder, I would definitely change it. I hope this isn’t the last you’ve seen of me.”

The show, from the team behind Love Island, features “a group of young, hot singles living together” in sunny South Africa.

The 12 singletons “take part in the ultimate battle of the sexes”, including physical and mental challenges, to compete for a cash prize.

Love Island, hosted by Caroline Flack, was a huge, surprise hit for ITV2 last summer – and returns later this year.

Survival Of The Fittest is on nightly at 9pm on ITV2.