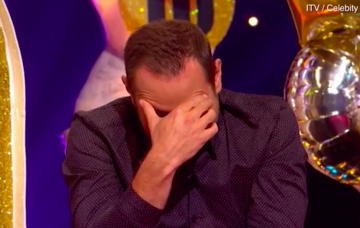 We all know Danny Dyer didn’t much like watching his beloved daughter Dani flirt with boys on Love Island – so maybe this was his idea of revenge.

The EastEnders actor stirs up drama on tonight’s episode of Celebrity Juice when he questions Dani’s boyfriend, Jack Fincham, about their sex life.

Danny, 41, is left shaking his head on the other team, apparently disapproving of the chat.

He gets his own back later on in the game when the presenter invited Danny – who is also dad to Arty, five and Sunnie, 11, with his wife Joanne Mas – to ask the pair a question.

Turning to Jack, 27, the Cockney star says: “What is Dani’s nickname for her lady bits?”

Danny says: “Good, good [bleeping] answer, well done. Congratulations. I like to think they’re called ‘out of bounds’, but I know they’re not, so…”

Jack looks innocent, insisting: “I ain’t seen it, I don’t know.” To which, his future dad-in-law responds: “Good boy.”

Their joint TV appearance comes after the revelation that Dani wanted a different kind of TV role alongside her famous dad.

The reality winner told The Daily Star on Sunday that she had been turned down by EastEnders.

She admitted: “I don’t know about EastEnders, they wouldn’t let me in it.

“I think it’s because my dad is already on it, so if I went on it there would be a massive outrage.”

She auditioned before doing Survival of the Fittest and Love Island.

Dani and Jack won the ITV2 reality show with an overwhelming 79.66% of the public vote.

Since leaving the villa, the pair have moved in together into a luxury flat in London and are excitedly looking forward to their future.

But dad Danny advised the couple to go and live their lives before settling down.

The actor, who had Dani when he was just 20, told the Daily Star last month: “As much as I love Dani, and of course I’m overjoyed we had her, I would advise her to have children later on in life.

How would you react to that question from your father-in-law?! Leave us a comment on our Facebook page @EntertainmentDailyFix and let us know what you think.