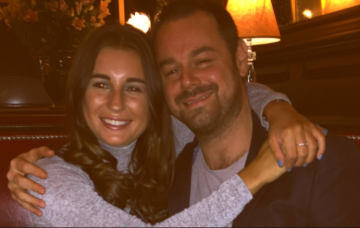 It's the fly-on-the-wall TV show fans have been begging for!

The most anticipated UK reality show EVER has begun filming, and it looks set to rival The Osbournes.

Love Island winner Dani Dyer and her beau Jack Fincham are to appear in their own fly-on-the-wall series, alongside her soap star dad Danny.

And, in the words of the EastEnders star, we can’t wait to put our trotters up and watch as the bangin’ drama unfolds…

In a live radio interview with Capital FM, Dani revealed that she’s already started filming the series – and it’s set to feature her nan and granddad ‘Bruv’.

The actress also confirmed that her grandad – who she calls ‘Bruv’ – will be taking part, adding: “Yeah, Bruv! Yeah, he goes ‘oh no, no I don’t want to go out!’ I can’t do a Spanish accent, that’s how he does it!”

Dani and Jack are now living together after falling for each other on ITV2’s Love Island.

They went on to win the show, and an army of fans in the process.

Before the show had even finished, fans were calling for the pair to get their own reality show – with dad Danny present, naturally.

Just recently, dad Danny said a reality show with his daughter and her boyfriend Jack could be “brilliant or a car crash”.

During an interview on Good Morning Britain, Danny told Richard Arnold: “We’re going to go and have some meetings about it and we’re going to see how we feel about it.

“It could be brilliant, or it could be a car crash.”

He added: “We’re not just selling our souls to the devil, do you know what I mean? We’re going to do (something) credible.”

Danny’s soap character Mick Carter is currently serving time in prison for a crime he did not commit.

It’s well known that the actor is taking a break from the soap later this year to appear on stage in a series of Harold Pinter productions.

Over Christmas, he’s also appearing in Nativity UK as the Hollywood Producer.

Double excited to be playing the ‘Hollywood Producer’ in @nativityuk when it comes to London’s @EventimApollo this Christmas (19-31 Dec)! Beautiful…..Get yourselves down there! …Roll on Christmas. #NativityTheMusical #PG

Back in July, Danny’s wife Jo Mas revealed they were considering a reality show, but that it would depend on Danny’s existing commitments with EastEnders.

She said: “We’ve been offered a reality show, but Danny is contracted at the BBC. We have always joked about it.

Would you tune into a Dyer reality show? Leave us a comment on our Facebook page @EntertainmentDailyFix and let us know what you think!