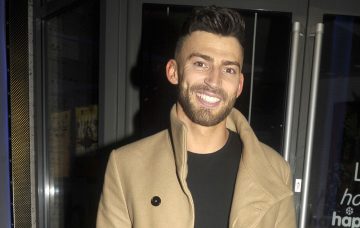 Maybe put a reminder in your phone for that one, Jake!

X Factor star Jake Quickenden has revealed he’s been so busy he once forgot about basic hygiene – skipping a shower for three days in a row.

Speaking to The Sun, Jake revealed that while he likes to keep himself busy, it can come with a cost.

When every hour in the day is filled, sometimes things fall through the gaps.

“I just can’t sit still!” Jake said. “When I was rehearsing for Peter Pan on stage in Blackpool last December, I was so busy I forgot to shower for three days.”

Jake, 29, also opened up about the demands of being a contestant on Dancing On Ice, where he’s partnered with professional skater Vanessa Bauer.

He claimed that the experience was taking its toll on his body, with the demands of skating pushing him to the limit.

“My job doesn’t feel like work to me,” he said. “At the moment I’ve been spending hours in rehearsals for Dancing On Ice.

“My dance partner Vanessa Bauer is incredible, but she’s had to be strict with me because I like to mess about. My body is a wreck because the training is so demanding.”

Jake admitted to having taken a few falls while rehearsing for the show, but brushed it off as part of the experience.

He’s been impressing the judges week in and week out on Dancing On Ice, emerging as a bookies’ favourite to take home the crown.

Speaking on Loose Women last week, Jake said he didn’t have much experience of ice skating before the show, apart from going to skating discos as a kid.

He said his whole body hurts. “Ice skating is a sport where you’re working muscles you didn’t know you had, so my bum has doubled,” he said. “I’m well happy!”

The singer is getting married in August, after proposing to Danielle Fogarty last September – although he confessed that their busy schedules mean they don’t get as much time together as they would like.

Danielle’s work as a yoga instructor often means she has to take classes in the evening, as well as during the day.

But Jake told Loose Women that he’s lucky he can train at a rink near their home, maximising the amount of time he can spend with Danielle.

Who do you think will win Dancing On Ice? Leave us a comment on our Facebook page @EntertainmentDailyFix and let us know!