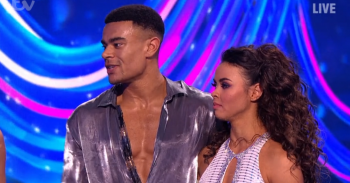 It was still a good score!

Dancing on Ice pro Vanessa Bauer didn’t appear to be happy with the judges’ verdict on her performance in the semi-final.

Viewers on Twitter came out in droves to laugh at the skating pro’s “full on resting [bleep] face” after questions were raised about her choreography.

Westlife singer Brian McFadden became the ninth celeb eliminated from this year’s show following a shock tumble on the rink, which means Vanessa and Love Island star Wes Nelson will be in the final.

But Vanessa seemed rattled as judges Jayne Torvill, Christopher Dean, Ashley Banjo and Jason Gardiner each gave a nine for their performance to ‘Never Too Much’ by Luther Vandross.

One wrote, “Vanessa’s face on #DancingOnIce was so dirty,” alongside a crying laughing emoji, adding: “She was fuminggg.”

Another tweeted: “Anybody else see Vanessa’s face when Ashley told her the choreography wasn’t great. Full on resting [bleep] face.”

Someone else joked that Vanessa had a “face like a slapped [bleep]”.

One viewer was right behind Vanessa, tweeting that Wes offered a “typical British reaction” by hiding his emotions but telling Vanessa, who is German, she was “right to show your annoyance”.

Anybody else see Vanessa's face when Ashley told her the choreography wasn't great 😂😂 full on resting bitch face. #dancingonice

Vanessa has a face like a slapped arse #DancingOnIce

Not happy¬Wes & Vanessa were robbed
Yes, her face says it all–my kind of girl#Wes typical
British reaction~don't show your feelingsdisappointmet Go #Vanessa you are right to show your annoyance#DancingOnIce@Itv pic.twitter.com/PiGphe53Kw

Wes might have maintained a pokerface during the judges’ comments, but that wasn’t the case as he revealed his song choice.

When discussing his decision to go with ‘Never Too Much’, Wes explained it was the song his parents danced to when they got married.

He said: “It’s my parents’ wedding song. My mum and dad genuinely mean the absolute world to me.

“I can’t even thank them enough for how much they’ve done for me. It’s a big thank you to them really.”

That got him thinking about his romance with ex-girlfriend Megan Barton Hanson, and he grew teary eyed as he reflected on the emotional breakup.

Wes said: “Me and Megs we had a really, really good bond and it makes me upset now to talk about it but it isn’t great, and it was really, really difficult at the time.”

For viewers wondering why Wes’ performance wasn’t up to the usual standard, Vanessa offered something of an explanation on social media.

Ahhhhh we’re through to the FINALS ! 🙈😱🤩 Thank you SO SO much for voting ! 🤩🤩🤩 @wes.nelson and I were soooo nervous tonight ! We honestly can’t thank you enough for your support ❤️ #DancingOnIce

Shortly after the semi-final, she took to Instagram to thank their fans and explain that the two of them were “soooo nervous”.

She added: “We honestly can’t thank you enough for your support.”

Are you hoping to see Wed and Megan get back together after DOI? Leave us a comment on our Facebook page @EntertainmentDailyFix and let us know.