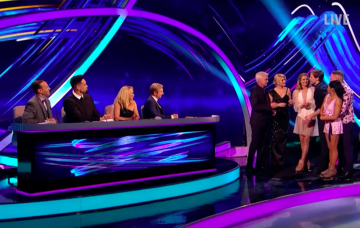 What did you think of Sunday night's twist?

Some Dancing On Ice viewers have criticised the ITV show for changing the rules and turning it into “a popularity contest”.

It came after the announcement of a shock double elimination ahead of the show, followed by another twist, when presenters Phillip Schofield and Holly Willoughby revealed on air that viewers could vote to save a couple – BEFORE the skate-off.

Holly said: “Tonight they really have to skate like never before.”

Phillip continued: “They’ve had to work twice as hard, no doubt they’ll be twice as nervous, because this week it’s a double elimination.

“Not one but two couples will leave the competition at the end of tonight’s show.”

“But if you want to keep your favourites in, don’t worry, because you can do that right now, because the phone lines are officially open!”

Some of the audience seemed outraged, complaining that you shouldn’t be allowed to vote ahead of the skating.

One fan tweeted: “Dancing On Ice has literally become a popularity contest and not a dancing contest by asking people to vote in a dancing competition before people have actually danced”.

Another wrote: “So we don’t need to watch them skate before voting as performance obviously not as important as celeb popularity”.

A third added: “I hate when they open the lines before anyone’s actually done anything, because it’s just a popularity contest, why don’t they just get the judges to give their marks now, before anyone has done anything.”

The usual format of the show finds each celebrity and their partner perform a live ice dance routine.

The Ice Panel – made up of Jason Gardiner, Ashley Banjo, Christopher Dean, and head judge Jayne Torvill – give a mark between zero and 10, which go on the leaderboard.

This combines with a public vote in order to determine the two lowest placed couples. The two couples at the bottom of the leaderboard then compete in the final showdown “Skate Off” and the judges vote on who gets to stay.

Read more: Will Karen and Kevin Clifton return to Strictly this year?

Bu this week we saw all THREE bottom couples compete in the skate-off, and in the end, the judges unanimously voted to save Max, meaning we said goodbye to Antony and Donna.

Despite the criticism, many more viewers loved the show, which featured singer Camila Cabello, performing her single Never Be The Same.

One tweeted: “Another week of #Dancingonice is done, with brilliant show tonight @Schofe @hollywills @AshleyBanjo @Jordan_Banjo, love you all as always see you next week for more #DancingOnIce.”

We loved the twists, too. And after all, it’s not the first time a talent show has mixed things up, in a bid to keep viewers on their toes.

In fact this latest series was already a reboot, after it came off air in 2014. The show brought Holly back, and a new backstage host, Jordan Banjo.

So we say, keep those twists coming!

Dancing on Ice airs Sundays at 6pm on ITV.

Read more: Where has Holly Willoughby been? The presenter reveals all

What did you think of the show twist? Leave us a comment on our Facebook page @EntertainmentDailyFix and let us know what you think!