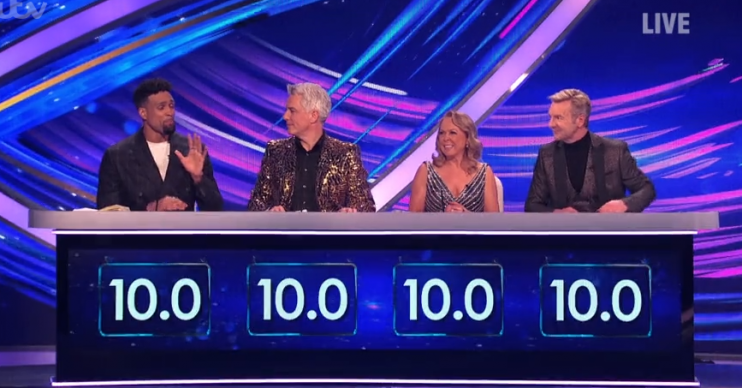 Viewers couldn't understand why the judges were there for the final

According to The Sun Online, the programme has reportedly “been hit with a string of Ofcom complaints”, claiming nine angry viewers have contacted the TV watchdog.

Finalists Perri Kiely, Libby Clegg and Joe Swash all picked up perfect 40s for their efforts on the night – but some viewers seemed unconvinced.

One person moaned on Twitter: “Nah, as good as the skating has been tonight there’s no way all performances have been worthy of a score of 40 #dancingonice.”

Someone else wondered: “@dancingonice Not sure why any judges tonight. Making abit of a mockery of it all. Come on now judges, not every performance was a 40 score.”

“The marking system is stupid. Why have judges if they were going to give 40 for the sake of it,” a third person pondered.

And yet another person sarcastically remarked: “I could turn up tonight, in my socks and pants with a note from my mum saying that I can’t compete, and I’d still get 40 points. #DancingOnIce.”

But not everyone was put out – and may have understood that the result of Joe winning was determined by the audience voting for their favourite.

Joe and his skate partner Alex Murphy edged out Diversity star Perri and Vanessa Bauer in a public poll that host Phillip Schofield described as being “very close”.

One fan enthused about the totals: “Every contestant deserved their 40 scores, they were all wonderful performances & all improved on the first time they skated their routines.”

“What a perfect routine for @realjoeswash and Alex!!! So pleased they got a well deserved 40 #dancingonice,” echoed another happy viewer.

ED! has approached representatives for Ofcom and Dancing On Ice for comment.

An ITV spokesperson said:  “The final of Dancing On Ice was a public vote and the winner was chosen by the viewers.”

Joe looked to be gobsmacked when he was declared the winner, with his jaw dropping open and his eyes opening wide.

And partner Alex almost dropped to her knees before she righted herself and embraced Joe.

An overwhelmed but over the moon Joe managed to get out: “Honestly, this has been the most amazing experience and to share it with Alex…”

Runner-up Perri posted after the show that he was “proud” of Joe and praised him as a ‘genuine friend’.