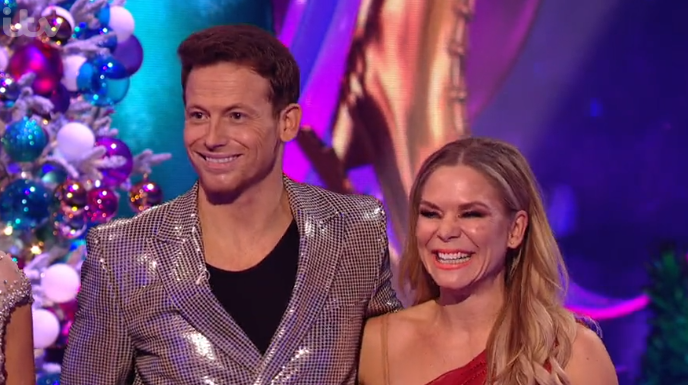 Some thought he was wearing a wig

The presenter took the ice on Sunday evening alongside his professional partner Alexandra Schauman.

But while many were in hysterics over Joe’s energetic personality, others were distracted by his hair.

Some people even thought he was wearing a wig.

One person said on Twitter: “What is going on with Joe Swash’s hair? Is it a wig? Is it dyed? Is it a transplant? I just don’t know!”

What is going on with Joe Swash’s hair? Is it a wig?

A third tweeted: “Is Joe Swash wearing a wig #DancingOnIce?”

What is going on with joe swash’s hair….?

Is it a wig? Is it dyed? Is it a transplant? I just don’t know!#DancingOnIce

Meanwhile, others were left gushing after spotting Joe’s girlfriend Stacey Solomon and their baby son Rex in the audience.

Little Rex was sat on his mum’s lap as Stacey cheered on Joe.

One fan wrote: “Baby Rex is so cute #DancingOnIce,” while another said: “Aw baby Rex!”

Baby Rex is so cute #DancingOnIce

As he made his debut on the ice, Joe left hosts Holly Willoughby and Phillip Schofield worried after accidentally stumbling as he got off the rink.

When Alexandra was asked if she thinks she could win again this year, Joe joked: “I don’t think so – one win was enough.”

Speaking on Stacey’s podcast, Here We Go Again, Stacey said: “It’s funny because I knew you resented me.