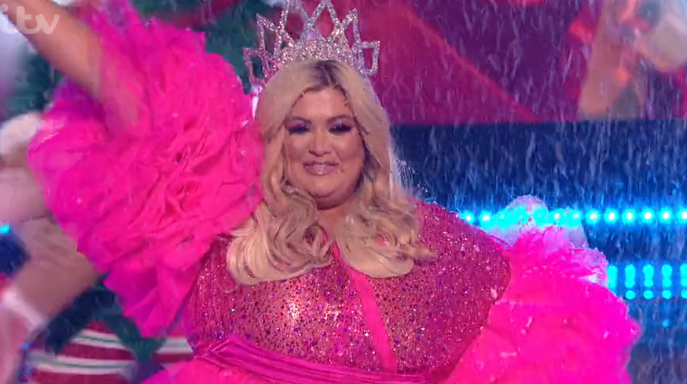 She definitely stole the show

Viewers of Dancing On Ice were divided as Gemma Collins returned to the ice last night for the Christmas special.

The TOWIE star made her highly-anticipated return in an extravagant pink fairy dress as she featured in Ray Quinn’s performance.

Ray, who won the show back in 2009 and became champion of champions in 2014, took to the ice for a festive spectacular.

Towards the end of the routine, Gemma was revealed as she wore the frilly dress, stood in the middle and waved her wand around.

She then skated around waving her wand.

One person said on Twitter: “Gemma had to ruin Ray’s return didn’t she.”

Another wrote: “Why did Gemma Collins have to come back for #dancingonice. She ruined last year’s show as well as ruining Ray Quinn’s performance.”

Gemma had to ruin Ray’s return didn’t she. #DancingOnIce

Why did Gemma Collins have to come back for #dancingonice. She ruined last years show as well as ruining Ray Quinn’s performance

A third tweeted: “Just caught a bit of #DancingOnIce. Great routine by Ray Quinn, but why on earth was Gemma Collins there?”

Just caught a bit of #DancingOnIce. Great routine by Ray Quinn, but why on earth was Gemma Collins there?

Others were thrilled to have Gemma back on the ice.

One added: “Queen Gemma Collins returning to the ice and waving her magic wand around, love her.”

One gushed: “I couldn’t LOVE @missgemcollins any more.”

Queen Gemma Collins returning to the ice and waving her magic wand around😭🎄love her #DancingOnIce pic.twitter.com/Dm3jxyOhfq

Meanwhile during the Christmas special, Gemma admitted she thought she DIED when she fell over on the ice earlier this year.

During one of her performances, the star fell face first onto the ice and it became one of the most talked about moments on the show.

Last night, recalling the fall, she told hosts Holly Willoughby and Phillip Schofield: “I remember thinking, ”I’m nearly at the end, I haven’t fallen yet, this is a miracle, maybe I’ll stay in for one more week.

“I got so excited, I just went too over the top with my movement, which you’re not allowed to do in ice skating and my toe pick got caught – and bang.