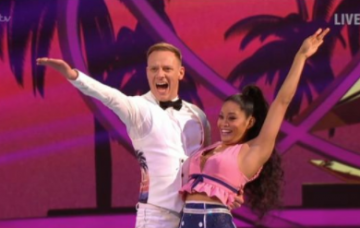 She seemed happy enough with him, though!

Corrie’s Antony Cotton was the first celeb out on the ice for the launch episode of Dancing On Ice.

And a very competent performance he put in, too.

But he risks melting the ice with the hot water he’s landed himself in with some viewers.

At the end of his routine – to Wham!’s Club Tropicana – he yanked at his partner Brandee Malto’s top and seemed to to take a cheeky peak.

Harmless fun, most would probably say – but some took offence at what they saw as inappropriate behaviour.

One commented on Twitter: “Ummmm did this scumbag actually just look down his skating partners top?????????.”

Another wrote: “Just because your Gay doesn’t mean you can pull a women’s top and look down it. Wtf !” [sic]

A third offered: “Why on earth did he just look down her top? Totally inappropriate.”

Meanwhile Holly Willoughby has raised the temperature of many a viewer with her stunning dress.

She pulled out all the opening stops for opening night and made a show-stopping appearance in a dazzling blue gown.

The mum of three oozed glamour in the plunging powder blue number, featuring a choker neck with a pussy-bow tie at the side, and a daring deep neckline.

Her tan gained on a festive trip to the Caribbean completed the perfect look.

Fans flooded the video with comments about the dress, with one writing: “That dress is stunning”.

But several simply commented “that dress” and left it at that.

So, so happy to have this show back – for the gowns and the gossip. And the skating, of course!