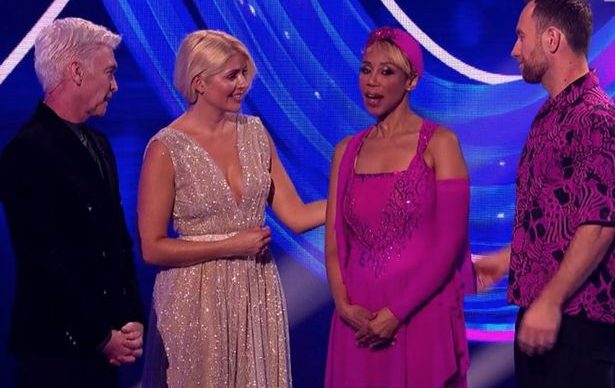 Dancing On Ice: Trisha Goddard is first celebrity to leave the competition

Trisha Goddard is the first celebrity to leave Dancing on Ice, after tonight’s skate-off.

The 62-year-old television presenter and her professional partner Łukasz Różycki became the first pair to be eliminated from the ITV ice dancing competition on Sunday (12.01.20), after they found themselves in the dreaded skate-off during last week’s first live show.

Trisha was among the first six celebrities to dance during the first episode of 2020 last week, and had to wait until this week for the final six couples to take to the ice before she could find out who she’d be facing in the skate-off, after she received the lowest number of public votes.

She was up against newsreader Lucrezia Millarini and her partner Brendyn Hatfield, but ultimately the judging panel – comprised of legendary ice dancing duo Jayne Torvill and Christopher Dean, as well as Ashley Banjo and John Barrowman – chose to save Lucrezia and send home Trisha.

Nerves were clearly getting the better of her as, earlier in the show she mixed up her words when she spoke about her peformance.

She said she would be skating to Heather Proud’s song Small, when she of course meant Heather Small’s Proud.

However, she wasn’t too disheartened to be the first to leave, as she has achieved a goal just by appearing on the programme.

After her exit, she said: “I achieved what I wanted to. I would’ve liked to have achieved a lot more, but I learned to skate.

“And Łukasz has just been the best skating partner.”

She did herself proud, but it’s a shame we won’t see more of her.

Shame for Trisha and Lukasz to see them going first! She can be very proud #DancingOnIce

Elsewhere in the show, Diversity star Perri Kiely was forced to skate without his professional partner Vanessa Bauer during the group dance, after she smashed her head into the wall of the practice rink whilst training earlier this week.

Vanessa suffered a concussion, and although she told fans on Instagram she feels “okay”, she was told by ITV to “rest [her] brain” before returning to the show to skate with Perri next week.

And model and actress Caprice injured her shoulder just hours before she was due to take to the ice with her partner Hamish Gaman.

The star powered on with her routine despite her injury, and managed to score 25.5 points out of a possible 40, giving her the second highest score of the night.

What did you think of tonight’s show? Let us know on our Facebook page @EntertainmentDailyFix.