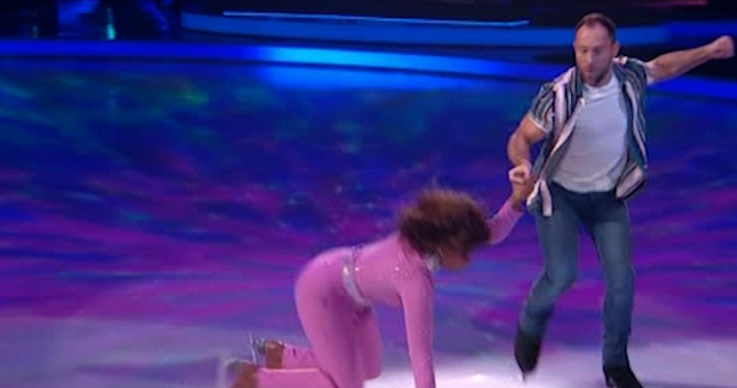 She's angry with herself

Trisha Goddard and Lukasz Rozycki found themselves in the skate off as Dancing On Ice returned to screens on Sunday (05.01.20).

The talk show host suffered a nasty fall during her routine and despite getting back up, it meant her and her professional skating partner are to face next weekend’s lowest scoring contestant in the skate off to stay in the competition.

Speaking to hosts Holly Willoughby and Phillip Schofield after she found out her fate, Trisha said: “I’m not surprised [to be in next week’s skate off]. I’m actually excited, it gives me another chance to show what I can do.”

Trisha received 13.5 points for her ice dance this week and admitted she was “really angry” at herself after taking a tumble.

Speaking about her fall, she said: “It’s the story of my life. I’m just really angry of myself. Someone made a comment online that pensioners shouldn’t be doing this and when I fell, I thought yes they are right.”

However, despite her fall, there was kind comments from ice skating legends Jayne Torvill and Christopher Dean, who praised her for getting back up.

I’m actually excited, it gives me another chance to show what I can do.

Jayne shared: “Well done for getting up and carrying on. I just think you have great courage to try new things and well done for having that.”

Chris added: “When you do do a fall, even for professional skaters, is getting up and getting your brain back. And I imagine when you went down there, it all went but you got up and back to that place and you got it back.”

Elsewhere, it was a great night for Perri Kiely and Vanessa Bauer, who topped the leaderboard with an impressive score of 27.5 points.
After his skate, he shared: “I’m over the moon with that, I loved that.”

Judge Ashley Banjo praised Perri – who he dances with in Diversity – for delivering a great routine, but says he made it look “too easy”.

He said: “You’ve got a lot of pressure on you. You delivered and that was a jam packed routine! You make what you do sometimes look too easy.”

It was also a monumental night for the show after Steps singer H and Matt Evers partnered up in what is the show’s first same-sex routine.

With a respectable 25 points, H admitted he was feeling very “emotional”.

Asked what that meant to him, he said: “Emotional. Because I wanted this for so long and it means so much to so many people. The world is ready for this.”

Matt added: “I just want to thank everybody at home for being accepting.”

And the dance certainly moved judge John Barrowman, who was in tears.

He was visibly emotional as he said: “That makes me happy on a complete multitude of levels.

“To skate as well as you did, the nerves are out of the way, be versatile. I’m overwhelmed, I’m almost speechless.”