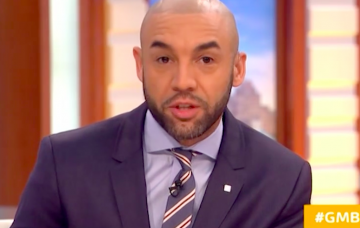 Dancing On Ice is not having the best luck with germs, after a second week of illness put a question mark over Sunday’s live show.

Contestant Alex Beresford, 37, revealed he is “really worried” what’s going to happen to this weekend’s show, after his partner Brianne Delcourt was forced to pull out of rehearsals.

On Thursday, the Good Morning Britain presenter took to InstaStories to say: “I’ve just spoken to Brianne, who is very ill. So, right now, I could be training on my own today, and we haven’t fully finished the routine. And there is a lot to do this weekend. Like, more than normal, because the competition is hotting up.”

“This girl is headstrong, so I wouldn’t be surprised if she actually did turn up for training. I spoke to her earlier and she did not sound great. Everyone’s been ill though, it’s just that time of year.”

He returned to InstaStories late on Thursday evening and seemed more hopeful, saying: “I spoke to Brianne a little bit earlier, and she seems to be feeling a little bit better.

“I was really worried about her at training today because she came in and she’d literally lost all the colour in her face.”

But speaking on Friday’s Good Morning Britain, the star revealed that things were bad again.

He confirmed: “Brianne is ill. She’s been ill over the last couple of days. She could only train for 45 minutes yesterday then she had to go home – she’s fluey. She got home, she messaged me to say she felt better.

“But then I woke up this morning to a message she sent me last night, saying she’s feeling worse again. So I don’t know what’s happening.

“We’ve got a massive day, we’ve got three routines to do in the show on Sunday.”

It comes as ITV confirmed fellow contestant Max Evans’ partner Ale Izquierdo has dropped out of this weekend’s show.

We’re told: “Owing to illness, Max Evan’s partner Ale will not be performing this weekend. He will instead be dancing alongside Brandee Malto.”

Read more: Strictly’s Karen and Kevin appear together in public amid speculation about their marriage

Just last week, dancer Vanessa Bauer was banned from rehearsals with her partner Jake Quickenden last week, after she came down with a viral infection.

The show favourites were forced to to miss 72 hours of practice time on the ice, while she recovered.

This year’s revived series has seen a number of skaters fall ill, including Alex, who missed several days of training when he was bedridden with flu.

And show favourite, Jake, 29, suffered more setbacks this week, when he revealed Vanessa had run over his finger during training.

The former I’m A Celebrity and X Factor star didn’t seem to be hurt, however, telling fans on his Instagram Stories: “So, just finished our first session of the week and we laughed the whole way through it

“We worked our [bleep] off but it always makes it easy when you’re having a laugh as well. Vanessa ran over my finger and I fell pretty hard as well, but here we are!”

Alex and Jake are two of the final five skaters left in the show as the series heads towards its grand final.

Do you think Alex and Max should get a free pass this week? Leave us a comment on our Facebook page @EntertainmentDailyFix and let us know what you think!