They'd been together for five years

Donna Air has revealed her relationship with the Duchess of Cambridge’s brother James Middleton has ended.

The Dancing On Ice contestant revealed that although she and James, 30, had split up before Christmas, they still remained on good terms with each other.

38 year old Donna, had been in a relationship with James on and off for the past five years.

She told the Mail on Sunday: “James and I are no longer an item.”

“We parted ways in December but remain the very best of friends and always will be.”

The news surprised many, especially as James was seen in the audience for Donna’s debut performance on ITV’s ice skating show in January.

As she took to the ice, he was spotted clapping and smiling in the audience for her first routine in the competition.

The mum of one shares 14-year-old daughter Freya with former long term partner Damian Aspinall, and set tongues wagging when she was spotted out with him recently.

But before you jump to any conclusions, she was sharing a lovely Valentine’s Day lunch with Damian AND Freya.

There was also a clue about her relationship with James being no more when Jordan Banjo presented her with a Valentine’s love heart card.

The star said: “That’s so cute. I think that’s my first card. Imagine that might be my only card!” she laughed.

Although her relationship with James is no more, Donna’s fight for survival on the ice is still ongoing.

After finding herself in the bottom two on a few occasions, this week’s double elimination on the show will be piling on the pressure for Donna and in fact ALL of the skaters.

On Thursday she tweeted: “@Mark_Hanretty and I had an absolute blast today, We know with a double elimination Sunday today ‘could be our last training session BUT boy have we made the most of it. Gonna give it all we got Sunday @dancingonice” 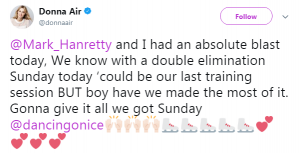 And earlier today she also let us into a little sneaky peak of what to expect tonight.

She revealed on Twitter that she will be doing a LOT of solo skating this evening, as well as throwing in a few new lifts and moves with professional skating partner Mark Hanretty.

She said: “So excited for @dancingonice tonight @ITV 6pm. I will be doing a lot of solo skating you will be pleased to hear ! Plus all new lifts and moves with best pro partner on the planet @Mark_Hanretty 🙂 Thank you once again for all of your rock solid support guys!” 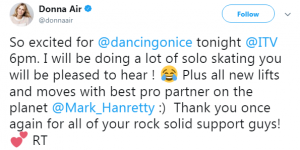 Fans were quick to wish her all the best…

Which two couples do you think will be leaving the competition tonight? Leave us a comment on our Facebook page @EntertainmentDailyFix and let us know what you think!