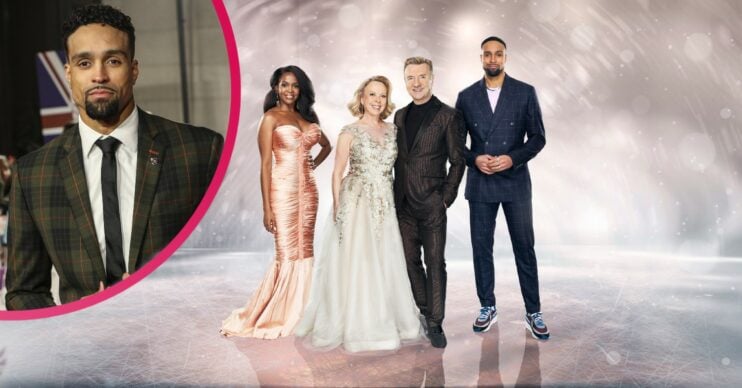 He's been a busy boy since shooting to fame in 2009

Last night (January 16), Dancing On Ice returned to our screens for another series and with it came the judges – and, of course, the gorgeous Ashley Banjo.

He resumed his role as judge on the panel, joined this year by professional dancer Oti Mabuse.

And, ahead of the show, he admitted he’s thrilled to have her sitting next to him for the 2022 show.

Dancing On Ice judges: How is Ashley Banjo famous?

Diversity are a popular dance group who won the third series of Britain’s Got Talent back in 2009.

Since then, Ashley has judged the Sky One series Got To Dance and he even took part in the film Streedance.

The dancer is now a judge for the hit ITV series Dancing On Ice.

What does Ashley think of the new Dancing On Ice line up?

Ashley can’t wait to be back as a judge as he revealed this year’s line up is “so good”.

He said: “I think that this year’s line up is the strongest in terms of the ability. I think they are going to be so good and obviously you can expect a slightly new panel as well.”

When asked who he’s most excited to see, Ashley revealed: “Kye [Whyte]. I’m really excited about seeing him because I think this will be unlike anything he’s ever done before.

Something else he’s looking forward to is Oti joining the show.

“Oti’s just got so much energy and so much skill herself. I’ve been around her quite a few times and she just brings this sass wherever she goes that you just love.

“I’m just really happy to have her sitting next to me,” he said, adding it’s important to have two dancers and two skaters sitting on the panel.

“Over the years people have become accustomed to it and seeing it being approached from different points of view. I think it works,” he said.

“At first people would look at me and be like: ‘Why are you there?’ But we’ve always had a couple of dancers and the legends that are Jayne Torvill and Christopher Dean.

“I think to go back to having more skaters, I feel like Jayne and Chris have got that covered. You are never going to get more expertise than Jayne and Chris.

“So let’s have people that look at it differently. I think it works,” he said.

Does Ashley Banjo have children?

The pair have been together for more than 15 years.

They also have two young children, Rose and Micah, and the doting dad often shares pictures of the little cuties to his social media platforms.

What happened when Ashley had a cancer scare?

Back in 2017, Ashley opened up about his cancer scare on Lorraine.

At the time, the 33 year old was choreographing a routine for ITV’s The Real Full Monty.

As part of the show, Ashley choreographed the famous Full Monty routine to raise awareness for testicular and prostate cancer.

Ashley explained: “Part of the reason I wanted to be part of this is I had a scare not that long ago. I found a lump and refused to do anything about it.”

He added: “Taking part in this is what made me finally go and do something about it and get checked out. Thank God, everything is fine.”

One of the most controversial things Ashley has done during his career was Diversity’s BLM dance on Britain’s Got Talent.

He recently fronted a documentary that explored why his dance group’s September 2020 performance on Britain’s Got Talent caused such controversy.

Ashley also told ED! in an exclusive interview that the performance had caused “division” in his own family.

And he opened up about the “hatred and trolling” as a result of the dance.

“All I have to do now is look in a direction people don’t like and you get a wave of people at your neck. But it is what it is,” he said.

“All I can do is slightly separate myself from it and know at the end of the day that it isn’t real. Half of the accounts that talk to you aren’t even real.

“But I can’t stop people having an opinion and I think what keeps me level is I’ve got a lot of love and a lot of support.”