Some even thought it was a 'fix'

The first celebrity was voted off Dancing On Ice last night in scenes many viewers found confusing and unfair.

Candice Brown faced Lemar in the skake-off and the four judges then made their decision based on their performances.

Candice received two votes from Jason Gardiner and Ashley Banjo, with Jason saying her routine was “cleaner, with more shape and style” and The Diversity dancer stating she was the better performer in the skate-off which he was judging on alone.

Olympian Jayne Torvill disagreed with them, and she voted to save Lemar because she felt his routine was more difficult.

Her former professional partner agreed saying Candice had improved but Lemar was the better skater.

His vote meant Candice was sent home which confused many viewers who couldn’t understand why the Bake Off champ went when they both had two votes each and cried a “fix”.

“Seemed pretty unfair that there were 2 judges each and she went IMO,” one wrote on Twitter.

Another said: “how did that work then Candice had 2 votes Lamar 1 Chris votes means draw so wasn’t he then meant to decide !!!!! Fix!!! Even skaters were confused!!”

However, Phillip Schofield had stated before the judges cast their votes that: “In the event of a tie, this week’s head judge Chris will have the final vote” – just like in Strictly where the head judge Shirley Ballas (formerly Len Goodman) is given the casting vote.

Read more: Not all viewers were impressed with Holly Willoughby’s DOI appearance

But many DOI fans weren’t happy with this system being used and said the decision should have gone to the public vote instead.

“The vote is ridiculous may as well just ask head judge every week!! Needs to be a public vote!!” one wrote.

Another said: “Gutted matt & Candice gone they had the better skate I say, that voting system sucks let the public decide.” 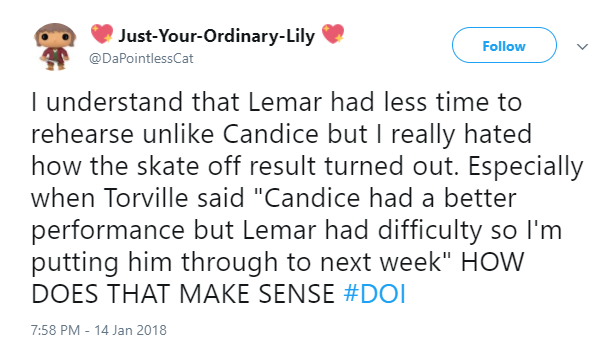 However, others felt the right decision had been made as the skate-off was stacked against Lemar.

The singer only had five minutes to prepare for the skate-off last night, while Candice had a week having found out she was in the bottom two last Sunday.

Some also agreed that the right decision had been made as Lemar had a trickier routine.

“That’s why non-skaters shouldn’t be judges. It was so obvious that Lamar’s routine was much more difficult and Candice spent half the time just being carried around. Thank goodness for Torvill and Dean!!!” one said.

Another agreed writing: “At least Torvill and Dean know what they are judging! Sorry for Candice but Lemar’s was so much more difficult? What were you watching Jason and Ashley?!” 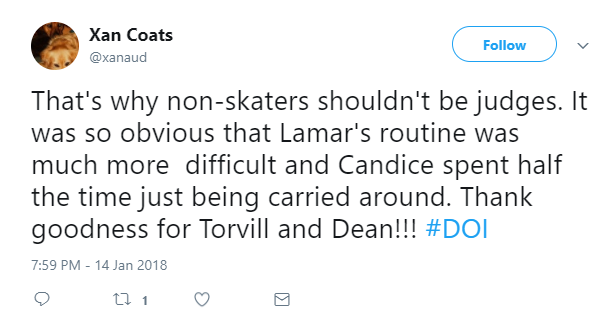 Meanwhile, others felt neither of them should have been in the firing line and the person who deserved to be in the skate-off and sent home was Cheryl Baker.

But it was Candice and her partner Matt Evers who had to say goodbye.

She told Phillip and Holly Willoughby: “I’m gutted. I did my best I couldn’t have done anymore.”