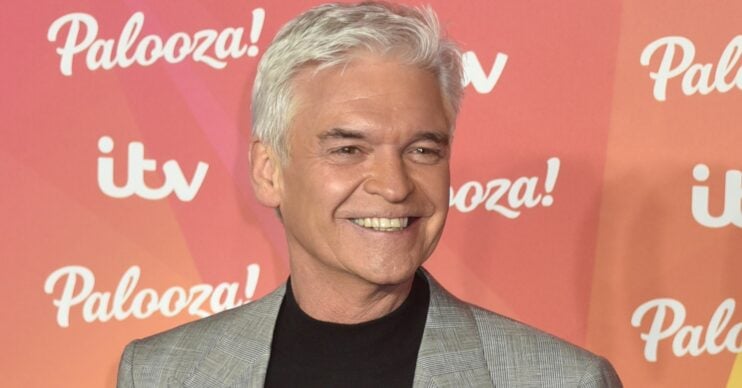 Phillip Schofield has teased that he has a secret admirer on Dancing On Ice.

The This Morning star returned to the show on Sunday night to present alongside Holly Willoughby.

Phillip had been forced to take time off the series while he recovered from Covid-19.

As a result, it seems someone backstage was especially happy to see him back.

Phillip took to Instagram Stories on Sunday night and shared a snap of a note left by someone.

It read: “If you were a chicken, you’d be impeck-able.”

The star then shared a photo of a heartfelt anonymous note on his dressing room door.

The heart-shaped note said: “You are a ray of sunshine.”

However, the star sadly didn’t reveal who the adorable note was from.

Meanwhile, some viewers weren’t quite so happy to see the ITV star return.

Phillip was replaced by Stephen Mulhern last week, and some fans are already wanting the BGT star back.

“Christ, Schofield is back, can we have Mulhern back, it’s already feeling like a funeral. #DancingonIce,” said one viewer.

“Feels like rubbish just want Mulhern back #DancingonIce,” tweeted as a second.

A third fan said: “What a shame we don’t have @stephenmulhern hosting again #DOI.”

However, not everyone felt the same.

One viewer said: “So nice to see Phil back!”

Meanwhile, lots of Dancing On Ice fans confessed last week that they would love to see Stephen and Holly present DOI full-time.

“Really don’t think anyone cares whether Scof is impressed by @StephenMulhern,” tweeted one viewer.

“Many of us were impressed by Stephen Mulhern’s presenting skills. I think he should take over for the rest of the series of #DOI. Well done Stephen for stepping in with Holly.”