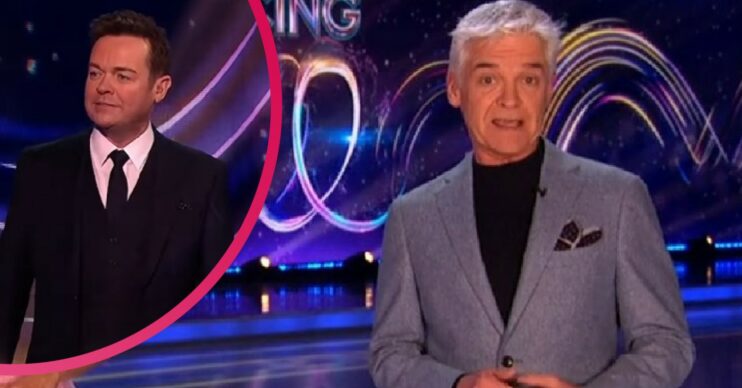 On February 6, Holly Willoughby was joined by Stephen Mulhern as he filled in for Phil following his Covid diagnosis.

However, last night, Phil made his return and admitted it was good to be back with Holly.

Phillip Schofield on Dancing On Ice

Phil said: “Thank you, I missed it last week. I had serious fomo.

“But made better by four or five gin and tonics!”

However, viewers watching were already missing Stephen and called for him to host permanently.

One person said on Twitter: “Anyone else missing Stephen Mulhern? It just felt so much more relaxed and fun last week.”

Another wrote: “Bring back Stephen Mulhern, Phil so boring.”

Others were glad to have Phil and Holly back together.

One said: “Unpopular opinion… I’m glad Phil is back, I missed him!”

Another tweeted: “@Schofe great to see you back on @dancingonice.”

It comes after Stephen won over viewers during last weekend’s programme.

Viewers were loving his jokes and banter with Holly.

Standing in for the incredible @Schofe on @dancingonice tonight ❄️⛸ Back with my right hand woman @hollywills for the first time in 16 years! See you tonight at 6pm on @ITV and @WeAreSTV #dancingonice pic.twitter.com/d7bI2OFRdw

Before his stint, Stephen had shared a photo of himself and Holly in rehearsals.

He said: “Standing in for the incredible @Schofe on @dancingonice tonight.

“Back with my right hand woman @hollywills for the first time in 16 years!”

As he was struck down with Covid, Phil watched the show from his home.

And he couldn’t help but poke fun at Stephen!

Stephen had said during the live show: “I know Phil is watching. Phil, I’m having fun.”

Phil then replied on his Instagram: “Not too much fun Mulhern…”

He quipped: “I know where you live.”

Dancing On Ice continues on ITV, Sunday February 20, at 6pm.