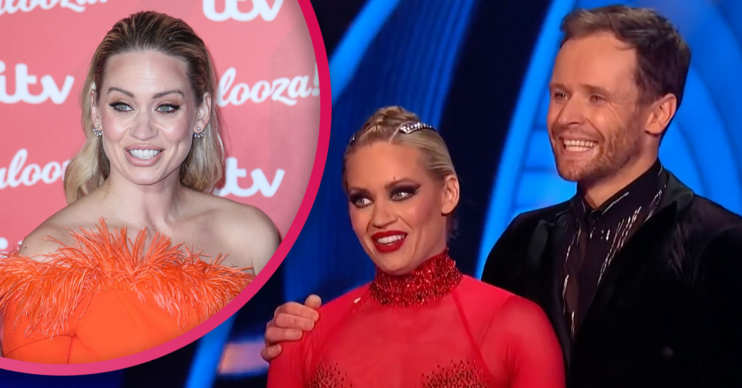 Is Dancing On Ice star Kimberly Wyatt married? Where does she live?

She's partnered with Mark Hanretty on the 2022 series

Dancing On Ice star Kimberly Wyatt was always going to be good – but did we realise she was going to be this good?!

She’s a trained dancer thanks to her past as a member of the Pussycat Dolls.

Not only that, but Kimberly has competed on winter sports show The Jump.

So she’s used to the slippery white stuff and dancing… Our money’s on her to win!

Here’s all we know about the gorgeous mum of three…

Kimberly is married to the equally gorgeous Max Rogers, a British model she got engaged to in September 2013.

The couple tied the knot in February 2014 and have now welcomed three kids together.

They are parents to daughters Willow, seven, and Maple, four, and welcomed third child – son Ford Senna, two – in October 2019.

And Kimberly has confirmed that Senna will be their last baby, after revealing she’d been sterilised after his birth.

Kimberly told the Loose Women: “Sustainability is such a big part of our focus as a couple and a family. We’d had our two children and we were really quite happy.

“Within a year or so or having the second one, we said: ‘I think we’re pretty much complete.’

“[And then] number three turned up.”

She’s also revealed that she can’t wait to reap the rewards that skating brings.

Kimberly said: “Having a baby on your hip every day pushes your body out of whack and three pregnancies, three caesareans…

“I’m sort of in recovery period as well as now it’s time to start life all over again with my new body and celebrate that.

“I’m really excited to celebrate my mum body and see what it’s still got!”

Kimberly opens up on cancer scare

However, before baby Senna arrived Kimberly admitted that she felt so sick she thought she had cancer.

Opening up to the Belfast Telegraph, she detailed her long family history with the disease.

She said her aunt had breast cancer twice, her uncle had throat cancer and her brother’s father died of brain cancer.

So, understandably, it is always at the back of Kimberly’s mind.

She said in February 2019 she felt so unwell she started to worry she had cancer.

And, she said, when she saw the blue lines the sense of relief was unreal.

“It was a relief and a huge surprise, although a beautiful one,” she said.

“I honestly never thought of pregnancy, because we were going to wait around eight years until we had a third child and were a bit further along in life, but life had other ideas for us.”

What band has Kimberly Wyatt been in?

In 2013 Kimberly told the Mirror that being in the band – of which Nicole Scherzinger is front woman – wasn’t easy.

She revealed that she hadn’t “spoken or seen” Nicole for “quite some time” – and said it wasn’t through “lack of trying” on her part.

“I just hope that Nicole is actually happy as a person. Our dealings together weren’t always easy – it wasn’t an easy situation to be in, in the Pussycat Dolls, period,” she said.

“But I have a lot of love for Nicole and if she offered [an olive branch] I would accept it with open arms. I wish we could get past that and just move on. I mean, jeez, let’s grow up and enjoy our lives.”

And it appears that’s just what the ladies did when they launched their comeback in 2019.

However, the pandemic kept on pushing their reunion tour back and, last week, Nicole took to Instagram to announce it was cancelled.

And two of the other girls in the band claim it’s the first they’ve heard of the news.

Speaking about the postponed tour, Kimberly said: “I had the Dolls tour that I was really focused on and it’s nice to have something that gives you a drive and a motivation.

“I’ve kind of lost that for now with it being pushed and pushed,” she said, revealing she’ll be giving her all to Dancing On Ice.

How old is Kimberly Wyatt and where does she live?

She was born in Missouri in the United States and moved to New York to study ballet at the age of 14.

When she graduated aged 17, she flew to Las Vegas and started working on cruise ships.

She now lives with Max and the kids in leafy Surrey.

How is she doing on Dancing On Ice?

In a word, brilliantly.

She scored a whopping 30 points for her first skate and topped the leaderboard last week with a score of 37.5.

However, fans of the show have said it’s unfair on those without years of dance training as all the trained dancers take the top scores.