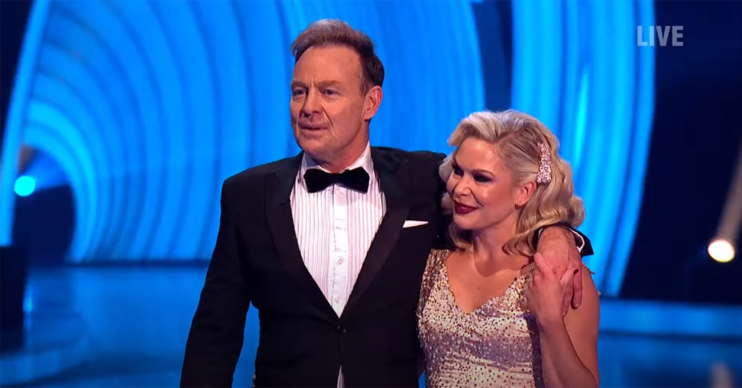 He's the fifth celebrity to quit

Dancing On Ice star Jason Donovan has withdrew from the series after taking the expert advice of the show’s medical team.

Jason is just the latest celebrity to leave the competition after the exits of Rufus Hound, Billie Faiers, Denise Van Outen and Joe-Warren Plant.

A statement from ITV said: “Jason Donovan has brought us so much joy with his performances on Dancing On Ice – from Priscilla through to the tango.

“Our thanks go to Jason and his partner Alex for being so wonderful and committed to the series.

Read more: Dancing On Ice: Phillip Schofield says ‘who knows’ if show will return this weekend

“We’re sorry to see them leave and we wish Jason a speedy recovery.”

Meanwhile, Jason confirmed the news in a video shared to his Facebook page.

What did Jason say?

He said: “On the advice of the medical team on the show, unfortunately I can’t continue in the competition.

“We put so much work into getting to this point, but I have to respect my health and my body.

“That is my biggest priority. I want to thank everyone at Dancing On Ice, Jayne [Torvill], Chris [Dean] and the judges.

“Phil, Holly, the production team, the runners and the celebrities who have become friends.”

He also thanked his partner Alexandra Schauman who he called a “beacon of support”.

It comes after ITV confirmed the show will return this weekend after airing a best bits special last night (February 22).

However, host Phillip Schofield did cast doubt on its return during Monday’s This Morning.

Read more: Dancing On Ice: Chris Fountain hits out after being ‘chopped’ from best bits special

He said: “Hopefully we are up and running with that next week, with a bit of luck. But who knows?”

Meanwhile, a representative for ITV confirmed: “The show will be back this weekend.”