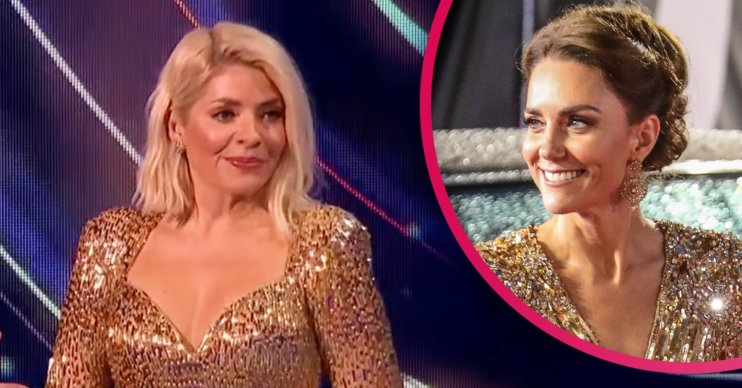 They both looked entirely gorgeous!

The Dancing On Ice final took place last night (March 27) and all eyes were on host Holly Willoughby in her gorgeous gold glittery gown.

Holly proved she was bonafide TV royalty last night, on the night of the Academy Awards over in Hollywood.

However, some did accuse Holly of ripping off the style of actual royalty…

Did you think the same? Read on for more!

What did Holly Willoughby wear for the Dancing On Ice final?

She accessorised the dress with jewellery by H Stern and thanked her glam squad for their “incredible work this series”.

Read more: Dancing On Ice fans are all saying the same thing as the show’s winner is announced

Posting on Instagram, Holly said: “Tonight’s the night… it’s the @dancingonice grand finale! See you on @itv at 7pm… let’s do this @schofe.”

Tonight’s the night… it’s the Dancing On Ice grand finale!

Holly’s This Morning pal Josie Gibson was among those commenting.

Vanessa Feltz loved the look, too.

She said: “Oh my goodness! Ravishing!!”

However, others accused Holly of stealing the style of the Duchess of Cambridge.

Of course, Kate wore a gold embellished dress by Jenny Packham for the premiere of the latest Bond film No Time To Die.

Read more: The Duchess of Cambridge’s most dazzling looks from her Caribbean tour

So how did fans react? Well, they turned it into a bit of a who wore it best style war!

Who won the style war?

“Looks like there’s a bit of copying Catherine’s dress (Duchess of Cambridge),” said one.

“I said that,” said another. “I think Catherine has outshone Holly on this occasion,” they added.

“Oh yes, me too. Catherine looked sensational in hers,” said a third.

Another commented: “Kate maybe gave her a loan of it for the night!”

“Almost identical to Catherine and I preferred on Catherine to be honest,” another declared.

“As much as I like Holly, Catherine wins hands down!” another said of the style war.

So who wore it best? Tell us on our Facebook page @EntertainmentDailyFix.