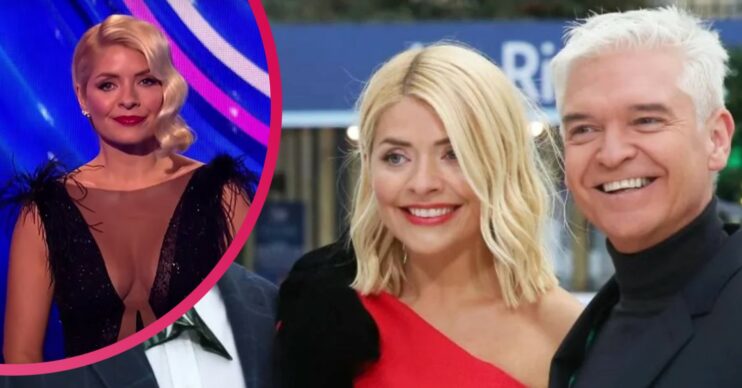 What do you make of Holly's dazzling first look of the DOI series?

Instagram fans have likened Holly Willoughby to a ‘princess’ as she gave a glimpse of her Dancing On Ice dress.

The DOI host, 40, hosts the ITV skating series alongside her This Morning co-star Phillip Schofield.

But it was all eyes on Holly yesterday evening (Wednesday January 12) as she shared the preview outfit snap.

What has Holly Willoughby revealed about her DOI dress?

Sharing three images of an outfit for DOI, Holly wowed her fans.

The pics showed her looking graceful in the exquisite ensemble, in full-length and close-up shots.

The full-length picture illustrated how the pink gown fits her perfectly.

Read more: This Morning host Holly Willoughby admits ‘fears’ as she details ‘next phase of her life’

And the close-up of Holly’s face revealed her flawless makeup and stunning earrings.

Another image depicted a stylist taking a photo of Holly on their mobile.

And a fourth showed how Holly’s locks were brought together from behind.

Referring to the intricate design, Holly captioned the uploads: “Four more sleeps until @dancingonice is back… sequins and ruffles will be hurt in the process.”

Holly’s fans were delighted by her look – with several comparing her to a ‘fairytale princess’.

This Morning pal Vanessa Feltz was among those who praised Hols and her ‘dress of dreams’.

Another person agreed: “Literally a princess! Can’t wait for the new season of DOI.”

“You always look so perfect! Goals,” declared one fan.

“So perfect Holly! Sparkle and shine,” contributed another.

And a third supporter added: “This look is just perfection.”