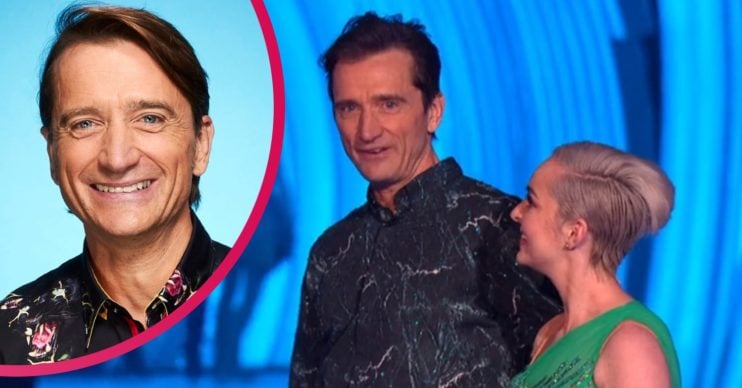 They called it 'the worst sportsmanship'

Dancing On Ice star Graham Bell reportedly kicked off behind the scenes after losing in the latest skate-off.

During Sunday’s (January 31) episode of the ITV skating show, the TV presenter found himself in the bottom two alongside model and WAG Rebekah Vardy.

And in the end, the judges decided to save Becky, making Graham the latest to leave the competition.

What did skier Graham Bell allegedly say on Dancing On Ice?

According to an ITV source quoted by The Sun, Graham left the rink “effing and jeffing”.

They also claimed that Graham blamed his pro partner Karina Manta for them getting the boot.

The insider told the newspaper: “It’s the worst sportsmanship in the history of the show. Everyone was stunned. Graham was screaming their routine was [bleeping] [bleep] at Karina.

“He did it in front of everyone. No one could believe it.”

Speaking further, the source alleged that Graham said “it was [Karina’s] fault” as the judges thought their routine was “too simple and basic”.

It’s the worst sportsmanship in the history of the show.

They added: “He showed his true colours. He skated off the rink effing and jeffing. It wasn’t nice to see.”

It follows Graham accidentally swearing on Lorraine. He was telling a funny story about a run-in with police at the Winter Olympics in Sarajevo, Bosnia and Herzegovina.

Chatting with Lorraine Kelly on her ITV daytime show, the former skier said: “We’d always had a bit of a party afterwards. I was kind of enjoying myself and climbing up a flag pole and was untying the flag and all of my mates down the bottom, who weren’t, I thought they were down there.

“I looked down and they’d gone and […] armed police [had replaced them].”

Graham continued: “And the fella took me back to the Olympic village in the back of a police car. But they let me keep the flag.”

As the interview concluded, host Lorraine apologised to viewers for Graham’s “naughty word”.

Do you think skier Graham Bell was the right person to leave Dancing On Ice, or should Rebekah have gone? Leave us a comment on our Facebook page @EntertainmentDailyFix and let us know.