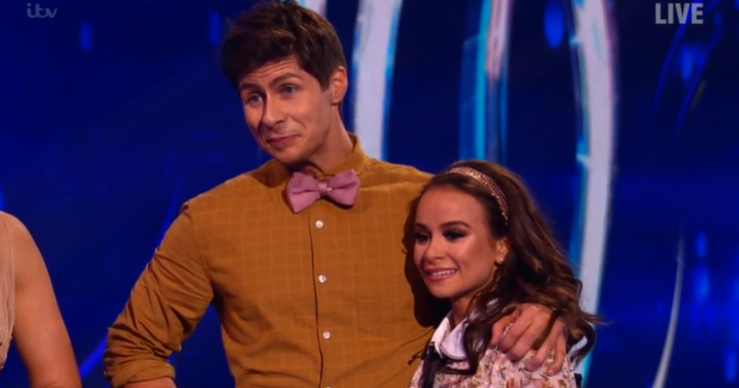 They think he's been undermarked week after week

Fans watching Dancing On Ice have been left fuming at Ben Hanlin’s scores from the semi-final, with many calling it a fix.

All the skaters did two performances in tonight’s semi-final and magician Ben scored 37.5 for his first skate and 37 for his second.

The first outing, to Ain’t That A Kick In The Head, saw Ben’s confident and impressive solo skate, but the judges marked him less than second competitor Libby Clegg, which many fans were unhappy about.

His second performance to a song that was personal to him, was to his wedding song, Jake Bugg’s Lightning Bolt.

But despite high scores and high praise from the judges, Ben was at the bottom of the leaderboard and ended up in the skate-off.

Fans at home were not happy, insisting he has been consistently undermarked. Many even called it a ‘fix’.

I don’t normally watch #DancingOnIce but what the hell is going on with the judging!! Ben was brilliant! and the girl before was no where near as good #fix

what a joke. ben’s skate was amazing, i would say probably the best of the night and he got scored like that yet libby got 10s??? thought they’re supposed to be treating her equally?? what a fix #DancingOnIce

Hi @dancingonice, tell those judges to fix your scoring, it’s a joke, cheers – loads of disgruntled viewers on twitter #DancingOnIce

I can’t get over how unfair #DancingOnIce are being today to Ben. Doing the absolute dirty and making sure Ben leaves. Absolute fix as usual.

Please vote for Ben, he’s really not being treated fairly tonight by the judges. Also don’t forget to vote for Perri too, it’s not a given he won’t be in the bottom two! #DancingOnIce

Earlier in the evening, viewers had been left sobbing as Libby performed her solo skate, which for visually impaired Libby was an extra challenge.

However, some were left angry after she scored two 10s, a higher mark than Ben.

After two consecutive skate-offs, Libby didn’t let it get her down as she came out and gave a confident performance for 45 seconds before Mark joined her to complete the routine.

She earned herself 10s from both Jayne Torvill and Christopher Dean, and 9.5s from Ashley Banjo and John Barrowman.

She even got a “FAB-U-LOUS” from John!

Fans at home were totally bowled over by her performance, crediting her bravery and her achievement.

Some even said they were in ‘crying’ watching her.

someone please tell me why i’m crying for libby #dancingonice

@LibbyClegg omg young lady you smashed the solo skate. In tears here. What a truly international lady. Yet another beautiful skate those 10’s were well deserved YOU SMASHED IT!! #LibbyAndMarkForTheFinal #DancingOnIce xxxx 💖💖💖💖

However some were not impressed that she scored higher than Ben.

I’m sorry but what am I seeing right now ? Libby scoring higher than Ben ? Why is she always overmarked it’s rediculous deffinately not worth a 10 let alone 2 😡😡#dancingonice

#dancingonice what a joke! Ben deservesd the 10s more sorry

I never complained about Libby being overmarked bc she never was
BUT TONIGHT was something else those 10s were not deserved I’m sorry
I can see what they’re doing, pushing her up the leaderboard bc they know she’ll be in the skate off and they want her in the final #DancingOnIce

I’m sorry, nothing against Libby and it is amazing what she does but HOW can Jayne and Chris give her 10 when they gave Ben a 9.5 and Ashley give her a 9.5 when he only gave Ben a 9?? It’s ridiculous!! #DancingOnIce