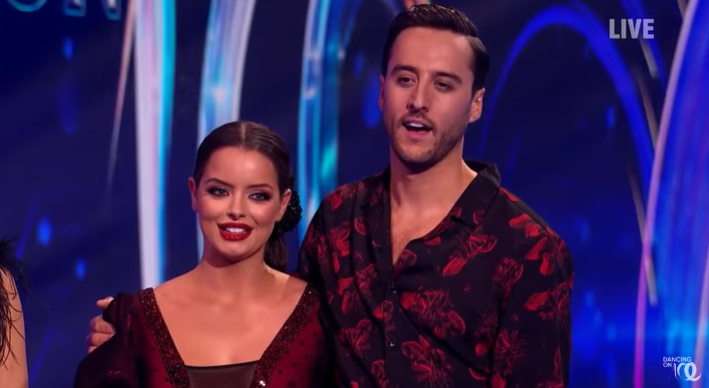 Fans of Dancing on Ice were left wincing in pain after watching Love Island star Maura Higgins land on her head during a risky dance move.

The 29-year old brunette suffered the injury while rehearsing a death-defying headbanger.

This move is not only the most dangerous on DOI, but one that is also banned in professional ice skating.

It involves one partner hurling the other around by their ankles in an up and downward motion, with their head coming close to hitting the ice each time.

This might be the last time you see me!

Since then there haven’t been many celebrity skaters daring to take it on.

But, known for her feisty attitude, Love Island favourite Maura was the first one of this year’s line up to brave it on Sunday’s Dance themed live show.

As she donned her helmet she gave a thumbs up to fellow contestant, Perri Kiely, and said: “This might be the last time you see me.”

Read more: Proof there is a Dancing on Ice ‘curse’

In a rehearsal video aired before the live performance, Maura did in fact smash her head on the ice.

Laying motionless on the ice, Maura cradled her head leaving her partner, Alexander Demetriou worried for her.

Thankfully she was wearing a helmet and did manage to recover quickly.

And, luckily for all concerned the live performance (without a helmet) was drama free and went off without a hitch, but that still didn’t stop viewers at home from tuning in any longer.

One tweeted: “Don’t think I’ll get over Maura… trying out the head banger and only getting 7.5. It’s a risky [bleep] move, and they were decent routines.”

While another reacted with: “Deserved to be scored much higher for that performance.”

Some fans hated the headbanger so much they turned off, with one calling for it be banned from the show.

This fan tweeted: “When anyone attempts the headbanger I can’t watch, I just have visions of their head cracking and blood spilling everywhere #DancingOnIce”

Another added: “Can I just say, I hate the headbanger?! It makes me feel sick and I can’t watch #DancingOnIce.”

“I don’t like to watch the headbanger so I switch channels,” wrote one more.

While this sensible viewer simply stated: “I really wish they would put a ban on the headbanger , gives me so much anxiety just thinking about it, couldn’t even watch the pro’s do it earlier. #DancingOnIce”

“Ban the bloody headbanger,” said someone else.

Another said: “I’ve always detested the pointless inclusion of the headbanger, banned by the International Skating Union for a reason. It’s a waste when there could be better content.”

Would a risky move put you off watching Dancing on Ice? Let us know on our Facebook page @EntertainmentDailyFix!