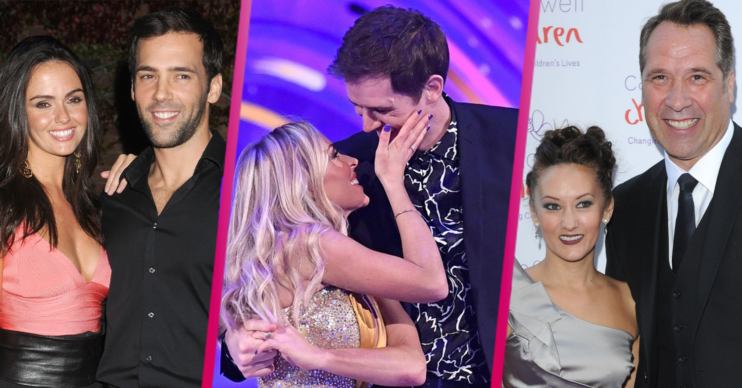 Dancing On Ice contestants who coupled up off screen

Marriage, babies and the dreaded curse!

As sure as night meets day and we watch sparks fly between the couples on the ice, the same question crosses all our minds.

Have any of couples ever found love during the show?

Even host Holly Willoughby has teased “watch this space” when it comes to this year’s Dancing On Ice contestants.

So who’s hooked up, fallen victim to the so-called “curse” and ended up finding their happy ever after?

After just three months of meeting, Kevin proposed and the pair got married.

In February 2021, Kevin and Brianne welcomed their first child together, Olivia Mae.

The couple then announced they were expecting their second child last November.

Coronation Street star Samia fell in love with French skater Sylvain Longchambon during her appearance on the show in 2013.

Samia and Sylvain went on to welcome a gorgeous baby boy called Yves in 2015.

They got getting married a year later.

However, their romance wasn’t without its controversy.

We’ve all heard of the Strictly curse, but could the same also be true for Dancing On Ice?

Before settling down with Samia – who was dating her Corrie co-star Will Thorp at the time –  Sylvain was with Hollyoaks actress Jennifer Metcalfe.

The couple were paired together during the 2011 series and dated for two years after meeting on the show.

However, there was clearly trouble in paradise as Sylvain started to fall for partner Samia.

Jen and Sylvain reportedly broke up on Christmas Day, Samia split from Will and the rest is etched in DOI history.

After former goalkeeper David Seaman, 58, appeared on the show in 2008, he fell head over heels for his skating partner Frankie Poultney, 48.

David proposed to the ice skater in 2013 and the couple got married two years later.

The pair – who are as loved up as ever – don’t have children together.

David does have four kids from his two previous marriages, though.

Before finding the one in Kevin Kilbane, Brianne enjoyed romances with a few other stars on the show – including Sam Attwater, Danny Young and Matt Lapinskas.

Brianne was paired with former EastEnders star Matt in 2014 and the couple started to date.

However, Brianne dumped the actor after her reportedly cheated on her with two other women.

Dating rumours started to circle around Love Islander Wes Nelson and his skating partner Vanessa Bauer after they both ended their relationships.

Prior to the split, Wes’ girlfriend Megan Barton Hanson spoke up about Vanessa.

She said: “Love that you decide to announce your break up with your boyfriend on the night of your first performance with my boyfriend!

“Hope the tactical break up got you the headlines you wanted babe.”

Although Wes and Vanessa never confirmed if they were dating, fans were pretty convinced and could sense a “spark” between them.

Alex was partnered with Maura in the 2020 series and the pair started to grow close.

With romance rumours swirling and Alex announcing his marriage had ended, Maura hit back at the claims.

The star also split from her boyfriend Curtis Pritchard shortly after the show in March 2020.

ITV eventually decided to axe the professional skater – but didn’t reveal why.

An ITV rep said: “Alex Demetriou will not be our main cast line-up for Dancing on Ice when it returns.

“This does not mean a final farewell and Alex remains a much loved member of the Dancing On Ice family with potential to return.”

Dancing on Ice airs on Sunday night at 6.30pm on ITV.