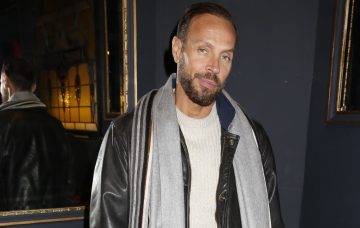 It came after that mega awkward interview on GMB...

Dancing On Ice judge Jason Gardiner has received support from a former contestant after he was accused of being “bullying” and “cruel” towards the show’s stars.

Jason found himself coming under fire for the way he critiques the celebrity skaters and their partners during a rather awkward interview on Good Morning Britain on Friday.

Tension mounted after GMB host Ben Shephard described Jason as a “sort of evil Lord” because he can be so “cruel”, while Kate Garraway accused him of “picking on” contestants.

Jason later hit back and defended himself – and now he has received support from former Dancing On Ice contestant Gary Lucy.

Hollyoaks and Footballers’ Wives actor Gary finished in second place during the 2010 series of the ITV skating show, and readily admits he found himself on the receiving end of Jason’s harsh comments.

But reaching out to Jason on Twitter, Gary pointed out that Dancing On Ice is a “game show”.

READ MORE: Jake Quickenden winces in agony and is given oxygen after Dancing On Ice injury

He said: “From someone who was on the receiving end of your tongue… when you step back and you take a sensible view of it all.. it’s the entertainment business we are all in.

“So that’s what you and all associated parties are there to do. ‘It’s a game show’ after all.”

Jason had appeared on Good Morning Britain to promote this weekend’s Dancing On Ice final.

But during the live chat, Ben told him: “I’ve known you for years and you’re a lovely guy but on air you turn into this sort of evil Lord.”

Shocked, Jason asked “evil, evil?!” before Ben replied: “Yes! You can be so cruel.”

After a montage of clips was played, showing Jason criticising GMB weatherman Alex Beresford’s performances on DOI, Kate asked: “Why are you so direct, let’s call it that if you don’t like the word cruel.

“You’ve had tough times in your life being bullied at school and then problems coming to terms with your sexuality and how people treated you over that, so you know what it’s like to be picked on. How would you look at your comments and say it’s different?”

Clearly shocked, Jason hit back: “That’s controversial because what you’re saying is I am picking on people and that you are likening what I do to bullying?”

Kate replied: “Some people might look at it and think that, but you must have decided it isn’t in your head so perhaps that explains why.” 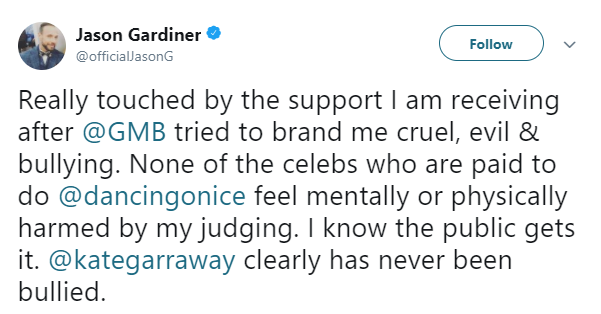 Following the interview, Jason took to Twitter and blasted: “Really touched by the support I am receiving after @GMB tried to brand me cruel, evil & bullying.

READ MORE: Corrie’s Brooke Vincent fancies a shot at Strictly after the Dancing On Ice final

“None of the celebs who are paid to do @dancingonice feel mentally or physically harmed by my judging. I know the public gets it. @kategarraway clearly has never been bullied.”

Do you think Jason goes too far in his critique or is he fair? Leave us a comment on our Facebook page @EntertainmentDailyFix and let us know what you think!