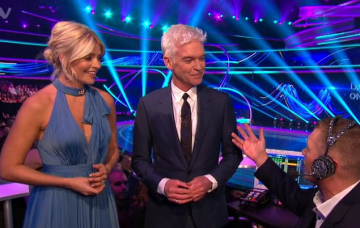 Dancing On Ice commentator breaks silence after quitting the show

He's also sent a message to his replacement

Viewers were shocked this week when Matt quit after just one week of providing voiceovers for the revamped Sunday night programme.

But speaking during his regular ITV Racing job on Saturday, Matt had nothing but kind words about both Dancing On Ice and newcomer Sam.

Laughing about how his week went, Matt joked: “It’s been what one could call eventful, I think!”

“For those that don’t know, and there will be one or two who have been on the moon in recent days, no Dancing On Ice for me tomorrow night,” he said.

“You know what? It’s been such a fascinating experience.”

Matt went on to praise the celebrity contestants and professional skaters for the dedication they bring to the programme.

“The celebrities doing the skating, the hours a day they put in and the media attention on them is unbelievable. And the professional skaters. It was so good to meet all of them.

“Genuinely, it was actually a really cool, fun experience and I’ll be watching tomorrow night and wishing the show well. It got 8.6 million viewers last week which is pretty sensational in the modern era of TV, so I’ll be watching and cheering it on.”

Matt ended by giving a shout out to replacement Sam.

“I would like to say that I did text Sam Matterface, who will be doing my gig tomorrow night. We had a couple of messages and I’d like to say, ‘Sam, I wish you all the best. It’s a really super cool job’.”

Matt and ITV gave no reason for his exit, other than to confirm he had left Dancing On Ice and would be back to work at ITV Racing as normal this weekend.

However, a source told The Sun: “Matt decided he couldn’t make his diary work as he thought. He’s a big character and a talented sports commentator but he had some mixed reviews in the first show, and he told ITV that perhaps it wasn’t for him after all.”

Despite the mixed reviews, it was still a shock for viewers to hear Matt had quit, as he’d been on Twitter after last Sunday’s show to assure everyone he’d try to win them over.

Sam already works for TalkSPORT, ITV Sport and bet365, so has plenty of sporting knowledge.

He tweeted yesterday: “Looking forward to an early start tomorrow! The guys have been working hard for months on the performances. Let’s see what they have for us Sunday!”